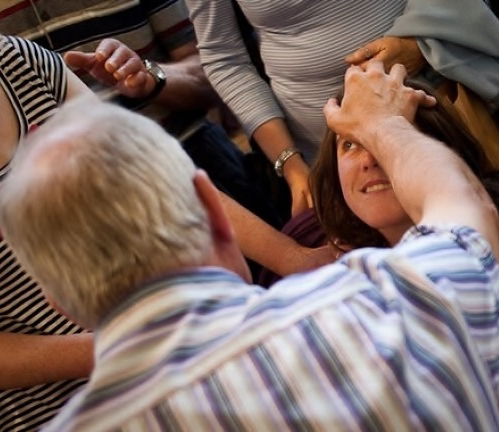 cently had some time with very some close friends. They relayed to me a current, this week, story that so captured the issues that concern us all regarding Holy Spirit manifestations, power, the gifts, healing, etc., that I thought I would post it, even though, I suppose, in some way, the last thing we might need is more data.

My friends had been investing closely with a young lady with drug addiction problems. They had been working with her, loving her, incarnationally laying down their lives for her, at great personal cost. Progress was slow, with lows and highs, but there was progress.

Here is their story of what happened;

Why I am at War with Charismatic Religion

“”A recent incident, involving a young woman that we’ve known for years, served to reinforce my belief that much of what we call “church” misses the heart of God completely.  This woman is in her mid-thirties, has three children (ages 9yrs, 13yrs and 21yrs), and is a heroin addict.  For her, a childhood filled with abuse (at the hands of her father) led to motherhood at age thirteen, and adult years marked by pain and tragedy.  The week before her visit to a local ministry, her 21 year old son, who is also a heroin addict, had overdosed in front of her (and his sister) in the kitchen of their home.  As blood poured from his mouth, his mother and sister furiously tried to get his heart to start beating again; and after several minutes, a shallow pulse returned.  Though his heart stopped multiple times on the way to the hospital, he miraculously survived the episode, and reached out to us for help.  As we focused our attention on the restoration of this young man, his mother went to a local church for assistance with her overwhelming feelings of grief and despair.

The ministry that she chose is a well-attended Charismatic church, which specializes in deliverance ministry.  At the point that she stumbled through the door (with her daughters in tow) she hadn’t slept for days, and was battling withdrawal symptoms.  Though it was in the evening, the church was filled with people who had gathered to hear an associate pastor speak about his new book on deliverance.  In what must have seemed to some as divine timing, her lengthy deliverance session eventually made its way to the platform, where everyone got to see and hear the powerful display of God’s authority over the demonic.  Thunderous applause rang out as she eventually declared that God had set her free, and many a prophetic voice confirmed to her that her life would be forever changed.  But as the congregation began to file out at the end of the service, the young woman found herself completely drained of energy.  Drug withdrawal, combined with days of sleep deprivation, and hours of screaming, crying, vomiting… had finally taken their toll; and she felt unable to make the 30-40 minute drive to their trailer in the next county.  Though everyone seemed to have hugs and good wishes for her, no one was willing to take her and the girls in, or even spend the night with them at the church.

Faced with the choice of spending the night in a downtown parking lot (with the girls), or braving the dark and winding roads in her impaired condition, she chose the latter.  And by the grace of God they made it home without incident.  She later told me that there were parts of the trip that she could not recall, even as she was pulling up to her front door.

I cannot testify to the validity of the ministry that occurred that night, and I will admit that I have dear friends who are part of that church.  But logic dictates that if you call something a peach tree, it ought to produce a peach at some point.  In the three months that have followed that evening, this young woman has remained addicted, has lost custody of her two daughters, and has been admitted to a mental hospital with “suicidal intentions”.

When I spoke to her last week, she seemed to be doing a lot better.  She told me that the hospital’s outpatient counseling program was really helping her, and that she was finding a meaningful connection with the other people in her therapy group.  While I was pleased for her, I couldn’t help but be grieved by the thought that what she’d found in the world was seemingly more potent than what she’d experienced in the “church”.  Maybe that’s not a fair assessment, but at the very least I’m guessing that if she needed a place to sleep for the night, one of the other recovering addicts would gladly let her crash on their couch.””

It is a gross slander and misrepresentation of our Lord and His kingdom. People become commodities for the “show” and the “expression of my gift”, and we think our church, or city, is having “revival” or the “Holy Spirit is moving in power” or other such nonsense.

If we don’t have love, we are NOTHING.

As long as I have breath, my soul will be at enmity with this paradigm of ministry.

This is why I am fed up, and at odds with my own tradition. A system that consumes people like coal in the hearth of ego and ambition, rooted in insecurity and an orphan spirit.

This is not doctrinal. This is not praxis. These are REAL people, with REAL LIVES, that we destroy without a second thought, because of our damnable, narcissistic, psychically co-dependent – –  “Holy Spirit meetings”

By Steve Crosby and others

Editor’s Note: Don’t be so naïve to say this is the exception NO……….. This is the rule. This should focus and strengthen us who are coming to the Light to continue to press in and battle when the going gets tough in our organic expressions. JLB