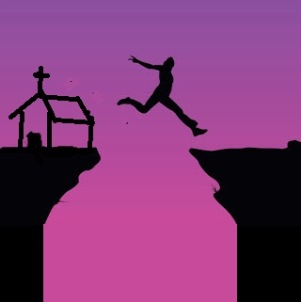 A few words about “leaving church.”

Virtually every time I catch wind of the phrase — “leaving church” — almost always, the person using the phrase never explains what he/she means by “church.”

This is how I put it in Christianity in Crisis:

On the title “Forget the Church,” what “church” are we talking about?

Forget assembling with other Christians in any way, shape, or form?

Forget all other Christians in the world?

Forget the Evangelicals, their movement, and the churches that contain them?

Forget the body of Christ?

Point: If you ever write on “the church,” be sure to define what you mean first. If not, many of your readers will ascribe their own meaning to what you say.

I wrote those words in April 2012, and well, some people didn’t get the memo. So the next time you see someone use the term “the church” without defining what in the cat hair they’re talking about, you have my full permission to link to this post and ask them to define the term.

On that point, there are four other things that deserve attention:

1. The “local church” is NOT a synonym for the “institutional church.” So can we please stop assuming they are the same. Countless people all over North America leave the institutional church every day. (According to Gallop, over 1 million adult Christians in the USA leave it each year.) But many of those Christians are now gathering with local ekklesias that are not institutional. They are not “church-less.”

2. Most people who leave the “institutional church” are NOT “postchurch” or “anti-church” Christians. Postchurch is the belief that “church just happens” anywhere, anytime, and with anyone – even extra local people. There’s no commitment or devotion or regularity involved.

I strongly critiqued the postchurch perspective here. The fact is, most people who leave the institutional church do so because they are looking for Christ-centered, face-to-face community, where every-member participates and JESUS CHRIST is being deeply known, loved, and expressed.

They aren’t navel gazers who want to be isolated. They want real community. In their experience at least, the typical institutional church didn’t provide this.

3. Most Christians who leave the institutional church do so because they LOVE Jesus and they adore His beloved Bride. That is, they love the Head and the Body. And they feel that the institutional church hampers how both should be expressed. See my post Why I Love the Church: In Praise of God’s Eternal Purpose. If any of this confuses you, that post makes the point crystal clear.

In this regard, Reggie McNeal famously said, “A growing number of people are leaving the institutional church for a new reason. They are not leaving because they have lost faith. They are leaving the church to preserve their faith.”

4. Christians never “leave the Church.” They only leave a certain kind of church. If you are a Christian, you are part of “the Church, which is His Body” (Eph. 1:22-23). That never changes whether you join a specific local assembly or your bones end up bleaching in the wilderness.

By “institutional church,” I am referring to those churches that operate primarily as institutions that exist above, beyond, and independent of the members that populate them. These churches are constructed on programs and rituals more than relationships. They are highly structured, typically building-centered organizations regulated by set-apart professionals (“ministers” and “clergy”) who are aided by volunteers (laity). They require staff, building, salaries, and administration. In the institutional church, congregants watch a religious performance once or twice a week led principally by one person (the pastor or minister), and then retreat home to live their individual Christian lives.

That said, I’m not “anti-institutional church” nor am I “anti-pastor.” Nor am I “anti-leader.” In fact, I’m a strong advocate of Christian leadership. I just happen to believe that all Christians are leaders (in their own ministries), all are priests, ministers, and functioning parts of the Body of Christ. See The Myth of Christian Leadership for details.

I’ve repeatedly said that God uses the institutional form of church. I was saved and baptized in it. To wit, God’s people are there, and God uses pastors and all kinds of clergy — even Catholic priests and Anglican bishops. But that doesn’t mean that these things . . . in their present form at least . . . are God’s full thought or ideal.

What God blesses and uses doesn’t indicate His best, highest, or desired will. F Viola”

I need to really thank Frank for that great introduction.

5. While it may be easy to label those that are leaving as “hurt or wounded” Christians, that is not always the case. The truth is and it has been my observation that the ones who are staying are more wounded and insecure than the ones that are leaving. At least those who have left had the guts to get up and leave against family ties, years of familiarity, traditions, and peer pressure. Who wants to be shunned and blackballed from the pulpit? Nobody! Who would be willing to pay that high a price? Only someone who is very sure of their identity in Christ!

I would like to add to the above explanation some insight from another brother Steve Crosby. Here is his article The Protestant Pope’s New Jezebel – You’re Just Wounded . Steve points out like the old excuse, “They have a Jezebel Spirit,” and the new excuse, “They are just wounded,” has become the quick answer-all when a hard working “member” suddenly leaves a congregation.

6. There is a fresh awakening of Love for God’s people among those who are leaving. This cannot be experienced fully inside the human trappings of the religious system. It simply will not work among Sunday morning spectators. The desire to live a daily Christ life among a community of other lovers of God is the magnet that is attracting these saints. For the average “church-goer” this type of family requires a commitment towards others that they are not willing to make. For many this kind of community is too intense and real. They like to keep their church (the religious system) and their brothers at arm’s length.

We were made in the likeness of the Godhead, and they function as a family. Christ without family is like God the Father without love for His sons. It is just not an adequate representation of His nature. For some cultures this type of family in your face is common, but to most Western minds (in America) this is an intrusion on their individualism. For those that have experienced this kind of love found in true community (Family), there is just no going back to looking at the back of peoples heads. Furthermore, this type of family is immune to any kind of political change or economic change. This is great news to whose world has been turned upside down recently and have found no help from the place they called their “home” church.

See my article: The Kind of Love that is Building His Church

7. Many are leaving wondering why there is as much sin in the church as outside the Church. It is a legitimate question. If we are the “greatest thing since sliced bread” as they say from the pulpit every Sunday, why is my 15 year old pregnant who practically grew up in this congregation? Shouldn’t all those sermons and teachings have produced something better in her? That is one of the greatest fallacies of a system which teaches that head knowledge (bible-thumping) somehow changes spiritual behavior. I can teach a person like a parrot to recite Bible verses, but that won’t keep their pants on when tempted. The truth is the first disciples changed the world because they had a daily relationship with the Father via the Holy Spirit. It is only that relationship that transforms the heart and soul of a believer. Many don’t know that the first disciples had no Bibles, and 90% couldn’t even read.

8. Many are leaving as they recognize the falsity of the Clergy- Laity division. All those robes and titles mean nothing! God is using all sincere holy vessels equally. As these believers grow closer to Christ they realize that their gifts were given to them to use in His kingdom, not to just play supporting roles to another man’s vision. For years titles and positions in the church have been bought and sold to the “deserving.” Many are tired of playing the game and have come to understand that it is God who promotes. If a man gives it to you, he can take it away from you, but what God gives you, no man can take away. See Jon Zens video on this topic: The Clergy-Laity Division An Institutional Lie

In conclusion the present exodus will not go away because we speak against it. The response should not be to study the values that are attracting those leaving and to try to add them to the present church mess. These values are not something we can develop into a new Church growth program. They are legitimate heart felt desires that the Holy Spirit Himself is putting into those willing to give up the comforts of their old religious expressions and seek a deeper life with God and with their brethren. If we hope to somehow come to Understanding Unchurched Christians and why they are leaving the Church, we must be brutally honest with ourselves. In an effort to help those who have legitimate desires to understand and to keep them from continuing to shine the brass on the Titanic, I offer the following statements.

In simple terms here is what we need to understand:

May the Lord lead you as you obey His voice,