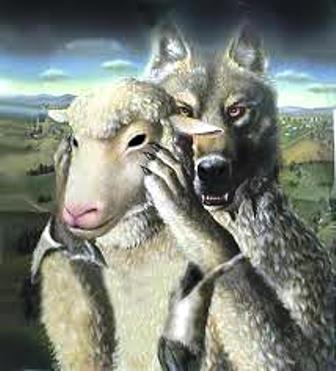 In the mid-1990s, there was a movement within Christendom that emphasized the restoration of apostles and prophets. Having just exited the “mega-church” scene, I was recruited into what, at that time, was one of the largest “apostolic networks” in existence. I got involved because of the relational aspect that was presented to me and the fact that God had been speaking to me regarding the necessity of apostolic and prophetic function in the Church.

By the end of my swim through apostolic networking, I had been given high-level access into 3 of the most apparently successful organizations of that kind; one here in the U.S. and two based in foreign lands. Please understand, I am not bragging by any means! My experiences were, shall we say, not pleasant but, in the larger framework of my life and calling, the experiences have proven to be invaluable as I have continued to pursue entrance into the Kingdom and equipping believers to do the same.

A real long story short, the “apostolic networking” was the same non-biblical hierarchy from the previous system of the mega-church scene; it was just laced with different terminology. While “equipping the saints to do the work of the ministry” through apostolic and prophetic function was heralded, I experienced very little of it taking place. Though the rhetoric was distinct, the practices and conduct of the people was primarily the same and even escalated, especially when it came to elevating certain anointed “apostles and prophets” while subverting the common believer.

Now, I know some who are reading this post might be saying, “Not all networks are like that!”  I am not here to debate that point or cause you to be defensive about what you might currently be involved in.  I am simply sharing my experience with you and will, hopefully, by the end of the post, have assisted anyone interested in discerning true apostolic function.

If believers do not come to realize the significance of understanding the equality of every member of the Body of Christ and learning to function in accurate local church government, the Head of the Church will be resisted in building His Church. The Body of Christ MUST get beyond the fascination of Christian Celebrity, whether they bill themselves as Lead Pastor, Worship Pastor, Founder/President, Apostle, Prophet, Bishop, or…..a litany of other titles used to amplify their standing. While there is definite, accurate Ascension Gifts active in the Church today and inherent value in each of them, the fullness of Christ is to be found in the building up, activation and function of the entire Body of Christ.

Fortunately, after being out of “apostolic networks” for a bit, Father was gracious enough to begin to cause my path to cross with genuine apostles and prophets. These men are, without question, unlike any other men that I have known or the privilege to walk with in the Kingdom. Though they vary in maturity, calling and function, one thing is consistent in each of them. They love Jesus Christ, completely honor Him as the Head of the Church and their Christ-like function has deeply enriched, not only my lives but also the Kingdom communities with whom we relate.

One such brother, Dr. David Newby from Australia, has done a superlative job in providing believers an excellent litmus test for apostolic authenticity.  The following excerpt is from his latest book,Liberating Apostles.

How to Discern False Apostles

2 Corinthians 11:13  ”……..for such men are false apostles, deceitful workers, disguising themselves as apostles of Christ.”(NASB)

Revelation 2:2  ”……and you put to the test those who call themselves apostles, and they are not, and you found them to be false….”

1 Corinthians 4:1, 6-7, “Let a man regard us in this manner, as servants of Christ and stewards of the mysteries of God………….. Now these things I have figuratively applied to myself and Apollos for your sakes, so that in us you may learn not to exceed what is written, so that no one of you may become arrogant in behalf of one against the other. For who regards you as superior? What do you have that you did not receive? And if you did receive it, why do you boast as if you had not received it? (NASB)

The NIV says it this way “….I have applied these things to myself and Apollos for your benefit, so that you may learn from us the meaning of the saying, “Do not go beyond what is written, ‘Then you will not take pride in one man over against another.”

In the context used by Paul, “what is written” could be the Scriptures which endorse the equality of man and that there is to be no supremacy of one above another. It confirms that it is not men that should be followed, but God.

The Amplified Bible puts it this way, “Now I have applied all this [about parties and factions] to myself and Apollos for your sakes, brethren, so that from what I have said of us [as illustrations], you may learn [to think of men in accordance with Scripture and] not to go beyond that which is written, that none of you may be puffed up and inflated with pride and boast in favor of one [minister and teacher] against another.” (1 Corinthians 4:6)

To reiterate Matthew Henry’s Commentary definition – the apostle is not to be overvalued, for they were ministers not masters.

If apostles do not come to you in a spirit of meekness, if they do not submit their ministry to you, if they do not receive as well as give, if they are not open to learn, then they may not be who they claim to be.  Do not submit yourself to ministries like this.

There are those in ministry who are quietly (or sometimes overtly) arrogant about their position, who demand the best seats in the sanctuary, the best accommodations, the VIP lounge, etc.  For the safety of the Church, we are compelled to do some fruit inspection and guard against contamination by the spirit of personal kingdom-builders from the old wineskin or the enemy camp.

The church in the second half of the first century was keenly aware of the need to test traveling ministries. The local church had elders and deacons, but these allowed in apostles, prophets and teachers who were itinerant and not yet localized in any particular church. They were seen as representatives of the Church at large. But when they visited a community of Christians, they were first of all tested by the standard of right teaching and moral character.*

The true apostle is to be distinguished by the absence of any selfish motive, any inclination to fasten himself upon a particular church or congregation, or to ask for money or seek financial security.**

These core principles of apostolic ministry would exclude from true apostleship all those who promote apostolic networks, enlisting churches and recruiting spiritual sons, all of whom pay tithes upstream for the financial security of the “apostolic ministry”.

The Super Apostles of the Corinthian Church

Paul faced a major problem in the group of men at Corinth who set themselves up as apostles, opposing Paul and drawing people to themselves. “For such men are false apostles, deceitful workers, disguising themselves as apostles of Christ.” (2 Corinthians 11;13)

By examining the negative issues raised by Paul about these men, we can more easily find the positive traits of the true apostles.

“For you tolerate it if anyone enslaves you, anyone devours you, anyone takes advantage of you, anyone exalts himself, anyone hits you in the face…….” (2 Corinthians 11:20)

a.)  enslaves you:  this is the drawing of people to a ministry who then uses them to fulfill his vision or empire expansion. Scriptures are manipulated to extract submission and blind, unquestioning obedience.  Expectations and performance standards are promoted, people are bullied into service and program attendance.

b.)  devours you:  this is a reference to financial matters. Legalistic giving and compelling people to give beyond their means is a common feature of many churches today. False claims are made and false promises are given as sweeteners to the faithful givers.  Tithing on debt and credit card giving are promoted. Many have ended up in debt or insolvency because of the church’s claims on their finances. Jesus accused the religious leaders of doing the same thing in His day: “who devour widows’ houses” (Mk 12:40)

c.)  takes advantage of you:  instead of encouraging believers to hear the Lord and obey Him, and to fulfill His call and ministry in their own lives, these false apostles just harnessed the time and energy of all around them.  They especially exploit the young and willing, causing many to burn out because they are operating outside their own gifts and callings.

d.)  exalts himself:  there are those in leadership whose identity and self-worth are in their ministry.  To have people depend on them, to look up to them and honor them makes them feel good. To maintain the balance of power in their own hands, they use people who flatter and elevate them, and ignore those who question or challenge them. “I wrote something to the church, but Diotrephes, who loves to have the preeminence among them, does not accept what we say.” (2 John 9)

e. hits you in the face:  staggering through it is, physical abuse still exists in the church by those who use intimidation to get loyalty and performance. Though this is comparatively rare, intimidation in many other forms is not. All manipulation and control are outside of the limits of the influence of true servants of God.

Paul had referred to these self-made apostles in his first letter to Corinth. These men were being competitive, and people were polarizing themselves with one apostle or another, claiming special relationship or adherence to them.

In response, Paul states that both he and Apollos were only servants – diakonos, and each of them just had different parts to play in the life and growth of the believers. (1 Corinthians 3:3-9)

In looking at the carnal manifestations of the false apostles, and the many statements of Paul around this issue at Corinth, we can see that Paul valued:

We must use these principle as a litmus test when weighing the words and fruit of those who claim to be apostles.

CHECK OUT THIS AWESOME VIDEO !!! http://youtu.be/m7l9vdsePnU