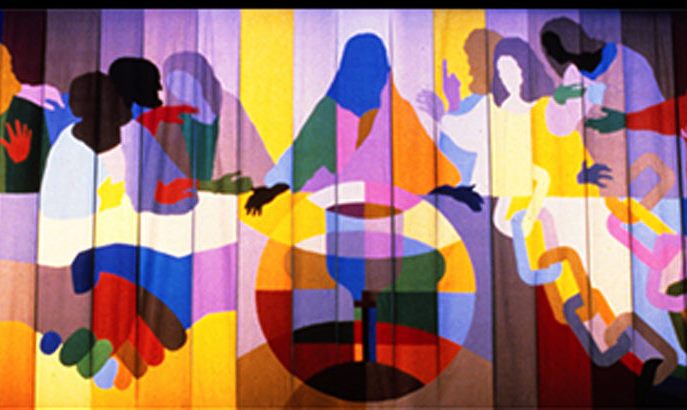 Moving beyond the mystical Body of Christ is needed in order to return to real family and community among His people. Most believers know a lot about local church and almost nothing about the Body of Christ. The apostle Paul was not using the idea of a Body as an illustration, but was speaking about a real Body with the Lord Jesus Christ as the head. This many-membered Body works together to be the example of the Godhead before the unbelievers and to care for one another here on earth.

Moving beyond the Idea of the mystical body of Christ is both a desire and a necessity if we are going to ever be recognized by our love for one another as the real disciples of Christ in this society.

Sad but due to the religious systems of men, the idea of a real Body of Christ has been watered down and all that is left is an empty shell of what our Lord meant for His people to understand. The reason is clear – if there is one Body, then all our many divisions, disunity and competition are an illegitimate disgrace.

It’s time the church returned to the focus of the early church. Last night I spent about 3 hours listening to some of the most popular Christian songs of the last 10 years. Every one of them was focused on the Lord loving us and us loving Him individually. One song actually said we can’t see you, and we can’t touch you. Not one song about the Body of Christ! It broke my heart, and I can’t believe how many years I was under this deception in the name of worship.

It is so much easier to love a God that is far away and one we only have to deal with when its convenient than to face God in the form of the Body of Christ on earth with all its brokenness and immaturity. Paul said it well but did not run away from the original focus:

24 I now rejoice in my sufferings for you, and fill up in my flesh what is lacking in the afflictions of Christ, for the sake of His body, which is the church,

Focus: The Body of Christ on Earth is not a Mystical idea. His Body is Him!

Let’s look at some key scriptures to see what the main focus of the Church should be.

Today the Church talks about my church and your church. Rarely does the idea of the Body of Christ and its many members gets discussed because our focus is on local church membership. We don’t want to talk about the Body of Christ. If the Body of Christ becomes the main discussion, believers will consider our other brothers and sisters outside of the local body. We will also have to confront the fact that Church is people and not the four walls of a building.

Below is one of the greatest lessons that our Lord taught the original twelve disciples.  Today at best, all we have made it into is some sacrament to wash feet. The religious system missed the most important part of the teaching which is found in the words “one another” and left us with another useless empty ritual.

12 So when He had washed their feet, taken His garments, and sat down again, He said to them, “Do you know what I have done to you?  13 You call Me Teacher and Lord, and you say well, for so I am.  14 If I then, your Lord and Teacher, have washed your feet, you also ought to wash one another’s feet.  15 For I have given you an example, that you should do as I have done to you.  16 Most assuredly, I say to you, a servant is not greater than his master; nor is he who is sent greater than he who sent him.  17 If you know these things, blessed are you if you do them.

In the following verses our Lord says anything you do for the downtrodden you are doing to me. The church today is lucky if they visit a sick person because that is what they pay the pastor to do. Forget the poor, needy, hungry and the incarcerated!

34 Then the King will say to those on His right hand, ‘Come, you blessed of My Father, inherit the kingdom prepared for you from the foundation of the world:  35 for I was hungry and you gave Me food; I was thirsty and you gave Me drink; I was a stranger and you took Me in;  36 I was naked and you clothed Me; I was sick and you visited Me; I was in prison and you came to Me.’

Below are what I would call foundational verses in the book of Acts describing the life of the early church. Their gatherings were called Agape feasts and the focus was on the Body of Christ, not just looking upward but staring at them daily in the face. The focus was on one another. Today we have two focuses, the selfish self-centered, individualist gospel of “me and God” and the confused priority on the lost. Let’s look clearly, brethren, if we get the “one another” right (the Body of Christ), the Lord has no problem adding to His Church those who need salvation.

I have never heard a sermon on the following verses because most preachers don’t believe it’s possible in the 21st century. They are right, but its only impossible because of the selfish, self-centered believer they cater to in the 21st Century.

41 Then those who gladly received his word were baptized; and that day about three thousand souls were added to them.  42 And they continued steadfastly in the apostles’ doctrine and fellowship, in the breaking of bread, and in prayers. 43 Then fear came upon every soul, and many wonders and signs were done through the apostles. 44 Now all who believed were together, and had all things in common, 45 and sold their possessions and goods, and divided them among all, as anyone had need.

46 So continuing daily with one accord in the temple, and breaking bread from house to house, they ate their food with gladness and simplicity of heart, 47 praising God and having favor with all the people. And the Lord added to the church daily those who were being saved.

32 Now the multitude of those who believed were of one heart and one soul; neither did anyone say that any of the things he possessed was his own, but they had all things in common. 33 And with great power the apostles gave witness to the resurrection of the Lord Jesus. And great grace was upon them all. 34 Nor was there anyone among them who lacked; for all who were possessors of lands or houses sold them and brought the proceeds of the things that were sold, 35 and laid them at the apostles’ feet; and they distributed to each as anyone had need.

The Lord’s Supper or Communion is another teaching the Lord left us, and the religious system sucked the life out of it by changing the focus from the Body of Christ/His Church on earth to an empty ritual about me and the mystical God up in Heaven.

Paul is saying that the focus of the Lord’s Supper is a celebration of the Body of Christ and our common union with Him. It was never meant to be a me and God focus!

27 Now you are the body of Christ, and members individually.

12 for the equipping of the saints for the work of ministry, for the edifying of the body of Christ,

15 but, speaking the truth in love, may grow up in all things into Him who is the head — Christ —  16 from whom the whole body, joined and knit together by what every joint supplies, according to the effective working by which every part does its share, causes growth of the body for the edifying of itself in love.

9 and not holding fast to the Head, from whom all the body, nourished and knit together by joints and ligaments, grows with the increase that is from God.

If the Scriptures are clear, then why do we have a problem seeing the Body of Christ?

The answer is the lack of love for one another created by a self – centered Imitation Gospel.

The preachers are preaching what the people want because that is what will bring in the numbers and the money.

Listen to the titles of these Pseudo- Christian books by the same popular author and may I add, they are selling like hot cakes!

“Become a Better You”

And we wonder why the church thinks of the Body of Christ as something mystical?

How do we turn this around and refocus His Body on loving each other, carrying one another’s burdens and live in real Christ-glorifying community with one another?

Personally I believe the modern church or religious system, as I call it, is beyond revival from within. You cannot revive something that never had Christ’s life in it and whose foundations are rotten to the core.

Now from “outside the camp,” we can rescue those that jump ship in search of the real thing, or have walked away frustrated by the glaring difference between the Christ of the Bible and the Christ of the pew. Let’s give them a family of loving believers to run to and a safe harbor in which they can be healed from their issues and their past.

The majority will still run to its Sunday morning games until……….

Father God has a plan to take His Bride back and remove the blinding scales from those that have been born from above but remain inside the religious system.

It’s not going to be pretty, but through it the Father will reveal to His people the shallow emptiness of the modern Church. People will first begin to stop giving and then the Lord will lower the final boom.  Once finances are removed, the religious system will collapse and come down like a house of cards. Hirelings don’t work for free and million-dollar buildings don’t stay maintained without money.

In that day we will need each other, and the only thing that will remain will be the real Body of the Lord Jesus Christ.

Our focus will return to caring for the widows and orphans, feeding the poor, loving the outcast and rejected of this society. No more going to “get my blessing” once a week, but being a blessing every minute of every day to those the Lord has around us.

My prayer is – Papa move us BEYOND!