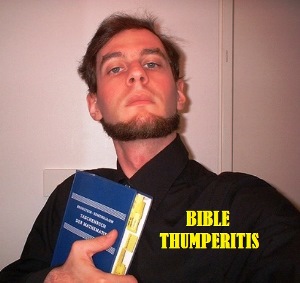 You Can’t “Study” to be an “Approved and Unashamed” Workman! Have you ever met someone who was a walking-talking Bible encyclopedia, yet unlike Christ in very pronounced ways, lacking the aroma of Christ? It is all too common among fundamentalists and evangelicals, who erroneously believe that “studying the Bible” is how one is “approved unto God” based on 2 Tim 2:15.

A basic premise of “studying the Bible” is originality: that is, sorting out what the original author meant and what the original hearers understood, before we try to apply anything to ourselves. This is not high-scholastic liberalism. This is basic, conservative, “hermeneutics.” Projecting our reality onto the scriptures, thinking “this is what it means,” or “this is the way it should be,” based on our view of the world, our culture and its values, is a good way to end up believing and teaching nonsense.

The way 2 Tim. 2:15 is usually presented conjures up images of first century believers with Bibles under their arms doing their daily devotions from scripture, reading, and studying the scripture, “rightly dividing it,” like good Christians in the apostolic tradition should and as should we! Entire denominations have this perspective as their foundational belief system. One of the biggest evangelical fundamentalist children’s ministries in the world uses this passage as their slogan!

Although this perspective is passionately believed, it is sadly an anachronistic mythology: it’s the reading of our reality into Paul’s world. It is a mishandling of the very scriptures to which devotion is being urged.

Study to Show Yourself Approved ?

What are the facts?

1. Paul attended the “Harvard” of his day. Being highly educated would have put Paul in the top 1% of his society: aristocratic by status and honor if not money. He counted it all excrement for the excellency of knowing Messiah in resurrection. That is something to think about!

2. Paul’s letters were read in public for a reason! Literacy rates in Roman Judea and Asia Minor (Ephesus, Corinth, Greece, Rome, etc.) at the time of Jesus and Paul were roughly 1.5-3% of the population! That includes among Jews! It would be lower among women. Some post-captivity rabbis taught that teaching a woman to read the Torah was a waste of time and a dishonor to the community, it being better to burn the Torah than let a woman read it! Early converts to Christianity were mostly women, children, and slaves from the lower classes!  The literacy rates were likely slightly higher among the aristocracy, perhaps reaching 5% of the population, but still nothing near our rates today in the West! In a village or early faith community, it would not have been unusual if there was only one elder who could read. That is why Paul’s (and others) letters were often addressed “to the elder” –elders were likely the only literate ones there!

3. At the time Second Timothy was written, there was no “Bible,” as we know it. If a faith community had one Torah scroll or a few codices and copies of apostolic letters, that would have been quite exceptional. Scrolls and codices were costly luxuries for the wealthy. When Paul speaks of “committing” the message of Messiah in resurrection to faithful men, there is good reason for it! There was no mass literacy! Apostolic transmission, “succession” if you will, was a practical and necessary reality.

4. It is offensive to our modern sensibilities, but the “democratization” of the scriptures (equal availability to all) is a thoroughly modern phenomenon. Jews believed that Holy Scripture should only be handled by holy/anointed people: prophets, priests, kings, and later, rabbis. The idea that everyone would, or should have, access to the scripture would have been foreign to them and seemed inappropriate to them. Our modern “normal” would have been their inappropriate. They would have been morally and spiritually offended by our egalitarianism.

5. The Bible, though in print for centuries after Gutenberg, was not affordable to the middle and the lower classes until the mid-nineteenth century! The emergence of the various Bible Societies in Great Britain, Europe, and eventually North America was due to the passion to affordably get the scriptures into the hands of everyone. This is a wonderful, but MODERN era phenomenon! It simply did not exist at the time of Jesus and Paul.

So . . . we are supposed to believe that Paul is exhorting illiterate believers to “study” something that didn’t exist, which if it did, they could not have  read nor afforded it, in order to be “approved” unto God, a workman not ashamed?

I don’t think so.

So what did Paul (I’m not interested in engaging in authorship debates.) have in mind when he wrote 2 Timothy 2:15?  The KJV isn’t a help here.

The word translated as “study” does not mean hit the books or go to the library! There were no “town libraries!” There were no “study guide resources!” The library in Alexandria was so unique and rare that it was considered a wonder of the ancient world. Besides, as I have said, the population was illiterate! No, “study” does not mean what that word has come to mean in our day. The idea is one of diligence, earnestness, eagerness, to make every best effort.

OK, be diligent for what?

The KJV “show yourself approved” is unfortunate. The word “show” means to “stand” or to present one’s self as for inspection. The word for approved means to come through fire like a metal. The image is a metallurgical one. The heat treating and tempering of metal through fire makes it fit for use. The metal is “approved” because it has successfully passed through the fires that have changed its characteristics.

The image is for a believer to stand up under the fires of adversity–to come through fire like a metal that has been refined. The passage is exhorting believers to be diligent to not fold under pressure. It has NOTHING TO DO WITH STUDYING THE BIBLE! We are to be diligent to stand in adversity as if “proven through fire” as the “real deal.”

Well, how are we to stand?  By cutting straight (KJV: rightly divide) the “word of truth!”

The cutting straight image is like holding a steady line when cutting through leather–don’t waver all over.  The image emphasis is not the “cutting,” it is the steadiness, straightness– “hold the line.” It does not mean cook up schemes of interpretation of a book that didn’t even exist at the time! That would have been incomprehensible to Paul and his hearers. It is about not getting sidetracked in fruitless metaphysical and spiritual debates–an epidemic condition in social media these days!

Since there was no Bible, and the masses could not read the Torah and the letters that might have been available, what “word of truth” is Paul talking about cutting straight through? “Hold the line” to what? He is talking about the basics of the apostle’s proclamation of Jesus as Messiah, resurrected from the dead. That is the “word of truth” as compared to all the other nonsensical doctrines and philosophies that abounded in the day.

How do we know this?

The verse before and the verse after verse 15 (context! context! context! always context!) are dealing with what Paul calls, in very uncomplimentary terms, “useless babblings” (likely referring to either Jewish mystic fables or Gnosticism, or both). Verse 18 ties it all together by specifically referring to erroneous teachings about the resurrection that Paul had to deal with in the churches he related to.

“Cutting straight” the word of truth means to hold fast to the apostolic proclamation regarding Christ in resurrection, and to not wilt under the adversity one will experience for doing so. This passage is about endurance, not “study” as we know it. The acquisition of mountains of Bible knowledge, without that knowledge transforming us into the image of Jesus Christ, is the deceit, and the offense, of popular evangelicalism.

I have written elsewhere (as recently as my previous two blog posts) that having the scriptures as we do is a blessing with responsibility that leaves us without excuse! Being diligent in them is honorable! But that does not mean we worship them!

My approval as a workman does not depend on my library and how much “study and devotional time” I put in. It depends on my faithfulness in endurance, and more specifically, my fidelity in relationship to the Faithful One who is in me, and has been in every person who has ever put their relational trust (faith) in the message of a despised and crucified Jewish prophet, who was raised from the dead and proclaimed . . . the Son of God.

Copyright 2013,  Dr. Stephen R. Crosby, http://www.swordofthekingdom.com. Permission is granted to copy, forward, or distribute this article for non-commercial use only, as long as this copyright byline, in totality, is maintained in all duplications, copies, and link references.  For reprint permission for any commercial use, in any form of media, please contact stephrcrosby@gmail.com.

Would you like to partner with us in distributing our materials and perhaps generate some income for yourself?  Please go to http://www.stevecrosby.com for details of our Affiliate program. This ministry is sustained by the freewill offerings of those believe in the message of a radical grace in a new covenant understanding. If this article has been a blessing to you, would you prayerfully consider making a tax-deductible contribution through our Paypal button to help? Thank you and God bless you.