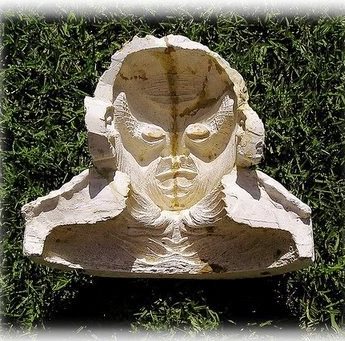 And no one puts new wine into old wineskins; otherwise the new wine will burst the skins, and it will be spilled out, and the skins will be ruined. But new wine must be put into fresh wineskins. And no one after drinking old wine wishes for new; for he says, The old is good enough. (Jesus of Nazareth, Luke 5:37-39 NASB)

There once was a man who, while shopping at an Arts & Crafts store, came across a plaster mold that was on sale at a deep discount. He examined the mold closely, but could not determine what shape the mold might produce. Being a curious sort, the man decided to purchase the mold intending to pour hot wax into it in order to see what the result might be after the wax had cooled.

gargoyle as ugly as the first!

In fact, the faces were identical. Determined to produce a thing of beauty from the mold,

the man decided to switch the material he would pour into the mold on his third try. So he procured some inexpensive plastic, melted it over a low flame, and poured it into the mold. The plastic cooled and hardened. The man popped the plastic out of the mold.

Another gargoyle! Identical to the first two!

The man was disappointed, but undaunted. He made several more attempts to produce something beautiful from the mold using plastics of higher quality (and greater cost) each time but the result was always the same. In the end, an ugly gargoyle face stared up at him from the table.
Finally the man conceded defeat.
The materials I have been using are not good enough, not pure enough, not valuable enough, he reasoned. If I would use silver or gold, the mold would produce a thing of beauty.
And then, because the man had neither silver nor gold, he hung his head and he wept.

Why a Religious Fable?

The moral of the story: It doesn’t matter what move of God you put into the religious system the power, the people, the hearts, the anointing, and the gifting because as soon as the move cools and hardens, what is left will look exactly like the old religious system–the system is incapable of producing anything else.

Responses to this article are welcomed.

This is so well said. Every generation of leaders think that they are going to do a better job than the last generation. Every Pastor thinks that “their church” can do a better job with the transfer members they got from that “other” church. Every Revival thinks they are the last move of God one before He comes! Every religious person thinks that if they just were holier they would get different results! People of GOD hear this! It doesn’t matter what you pour into the SYSTEM. It’s religion and it will never produce DISCIPLES! Don’t send Christianity on another 2000 years merry go round! Don’t wait till you are 80 years old to realize you have wasted your time! JLB