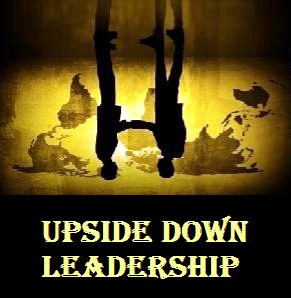 “Then the mother of the sons of Zebedee came to Jesus with her sons, bowing down and making a request of Him. And He said to her: “What do you wish?“

She said to Him, “Command that in Your kingdom these two sons of mine may sit one on Your right and one on Your left.”
But Jesus answered, “You do not know what you are asking. Are you able to drink the cup that I am about to drink?”
They said to Him, “We are able.”
Jesus said to them, “My cup you shall drink; but to sit on My right and on My left, this is not Mine to give, but it is for those for whom it has been prepared by My Father.”
And hearing this, the ten became indignant with the two brothers.
But Jesus called them to Himself and said;

“You know that the rulers of the Gentiles lord it over them, and their great men exercise authority over them. It is NOT this way among you, but whoever wishes to become great among you shall be your servant, and whoever wishes to be first among you shall be your slave; just as the Son of Man did not come to be served, but to serve, and to give his life a ransom for many.” Matthew 20:20-28

There is no more popular or sacred foundational truth within Western Christian religion than the importance and necessity of – effective leadership. Leadership conferences abound and the shelves of Christian bookstores are littered with countless books and manuals on this subject! It seems that the success or failure of God’s business (of doing or building the church), like any other business, is utterly dependent upon the raising up and functioning of visionary can do leadership. The core premise of modern Christianity and especially the modern mega-church, is that the growth of the body both numerically and spiritually is the product of effective leadership. Hence, a failure in numerical and/or spiritual growth is perceived as a failure of leadership and signifies the necessity of a leadership change.
Our faulty belief is that without leaders the sheep would all be lost and would most likely become lunch. Yum!

Our modern church leadership structure has its origins in the pagan pyramidal (top down) Roman authoritarian governmental system. This approach to “building the Kingdom” has been , at best, an abject failure. It is a prescription for disaster,

There are three dangerous “games” that the children of God love to play. They are:

Our Lord recognized that the leadership problem was not unique to the pagan culture of His time but also well entrenched within Judaism. Many of God’s people were followers of one sect or another – one human leader – one rabbi or another. One of the two most prominent sects or ‘cults’ within Judaism was the Pharisees. They were the fundamentalist holiness people of their time. They were a mainstream denomination and many Jews were adherents to their traditions and doctrinal positions. Despite their popularity and piousness (or appearance thereof) Jesus manages to very adeptly stomp on their sanctified toes. We read in Matt. 15:

Then the disciples came and said to Him, “Do You know that the Pharisees were offended when they heard this statement?”

But He answered and said, “Every plant which My heavenly Father did not plant shall be uprooted. Let them alone; they are blind guides of the blind. And if a blind man guides a blind man, both will fall into a pit.”

The message concerning the danger in following men rather than or in place of the Lord Jesus (via leadership of indwelling the Holy Spirit) became sadly apparent to me once again in the aftermath of recent disclosures concerning a couple of prominent church leaders, locally. One who has national and international standing has recently come under much criticism for financial manipulations and a top down controllling church structure where dissent in not tolerated. The other, a mild mannered, modern, hip, low key and more ‘emergent’ style pastor admitted to having an ‘affair” with a church staff member.
.
What I am NOT doing is denigrating these men. After all, they are still men. What I am saying is that the error is in trusting in mere mortals rather than investing our faith in Him! The effect of misplaced faith and loyalty ia that countless Christian men and women are now wounded and disillusioned! Still other followers, rather than face the truth, seek to defend these leaders and remain loyal to them. Both of these groups are victims, not of poor leadership but of placing their faith and trust in men rather than in the Lord Jesus Christ and the leadership of God’s instrumentality- the Holy Spirit.
.

As Jesus points out, the danger of playing follow the leader is; If the blind lead the blind both shall fall into the pit.” BOTH (the leader and the follower) fall.

Following men is NOT the correct path to discipleship no matter how seemingly gifted or sincere you or they are! It can and has often led to rack and to ruin.

Although there is an extreme danger in following men, the other side of the coin is the inherent danger in placing the burden of ‘leadership” of God’s people on the shoulders of brothers and sisters! We tell those who we perceive are “called” that of necessity special gifted and chosen vessels who as ministers are called to bear responsibility for the care, feeding, health, welfare, safety,

growth and well being of God’s people! Chosen vessels or ‘anointed’ leadership is not the answer to our Lords prayer that the ‘Kingdom come to earth as in heaven.” The Fathers answer to that petition came at Pentecost! 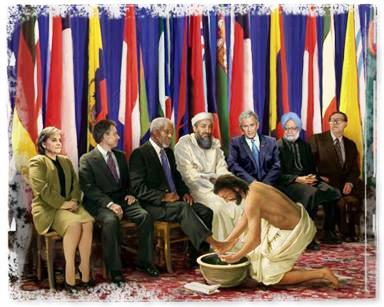 Trite but true is that one picture is worth a thousand words (maybe 2,000 of my words).
.
The question here is much like “Where’s Waldo?”……………………………. Where is the Leader?
Who is the leader? How do you recognize the leader?
What we need are not gifted men to follow but the giver of all good gifts.
What we need is not truth but the Spirit of truth by which (spiritually speaking) all truth can be discerned.
Leadership is not a position of power, authority, or prominence – but that which is portrayed above.
It is not the leadership of men that is required to “get the job done” but the leadership of the Holy Spirit, the Spirit of Truth, The Spirit of Christ..
Seek to be filled with the spirit first and foremost! Seek not gifted men but the giver of all good gifts!
As Jon Zens*** has so eloquently said:When the brothers and sisters are present together, “leadership” does happen. A group may not have “leaders,” but that does not mean they are not “being led.” The issue is: Is Christ leading by the Spirit, or are humans leading in the flesh?Jesus’ leadership of the ekklesia will be fluid, floating, and shared—varying each time they come together, as the Lord leads. We might call this phenomenon “leadership in the moment.” We are used to looking to the same person(s) to guide believers’ gatherings. Instead, we should be looking to Christ to lead the sisters and brothers in their expressions of Him.

Christ’s view of “leadership” is upside-down from the way the world functions. It is from the bottom of the ladder, not the top. The truth is, in Christ’s kingdom there is to be no ladder! How can a bunch of table-waiters have a ladder? They are all at the bottom serving Him and one another.   “Leadership” from Jesus occurs in people through example, maturity, humility, and brokenness, not positions, titles, intimidation, guilt and fear.   We have inherited so many false assumptions about “leadership,” that it is probably safe to say that we would do well to re-visit the whole topic in light of Jesus’ words, “Neither be called ‘leaders,’ because your Leader is One, the Christ.”