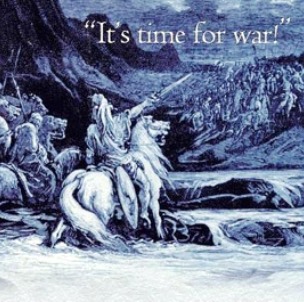 Beloved, while I was making every effort to write you about our common salvation, I felt the necessity to write to you appealing that you contend earnestly for the faith which was once for all handed down to the saints. – Jude

It’s hard to deal with something birthed out of misplaced identity, focused on an earthly kingdom while assuming authority for something that is not on God’s agenda.  It is particularly difficult to oppose the proliferation of agendas which are being promoted by brothers.  Those who are involved with the particular position/agenda which we oppose are our beloved brothers.  We share the same Father.  We also share the same propensity for our flesh to get excited about a matter to the point that we want to develop a strategy and broadcast it abroad.  We need one another.  We need candor among us.

Our problem is not with “dominion,” but with the scope, the attitudes and language, and the tactics that some are proposing to accomplish God’s purposes.  As long as their definition of Apostle is the Knight in Shining armor, aka God’s Superman, they will refuse to die.  They will cling to this concept:  “For we must live with our swords raised high to accomplish the task of taking the beachheads from the Enemy for Jesus.”

Their primary “choir” is largely made up of people who have been Christians for many years, never discipled, without proper foundations, yet ambitious to find their identity in “spiritual” activity.  Hence, we now have a new “office” in the body of Christ: intercessors—a militant army of intercessors—and a brand new official function: “governmental intercession.”

There will be an eventual and certain failure for this freshly spun dream to find fulfillment, and the blame will be put on those “callous” and “carnal” Christians who, if only they had fasted, prayed, if only they had agonized more, interceded longer, if only they had taken seriously their call to arms, America would have long since become the Mecca of global revival, there would be a chicken in every pot and Happy Times (would be) Here Again.

God’s authority is not based on a church rising up, but believers going down: down to death and His resurrection life, down to service to one another, to be the least, to be servant of all, not these pipe dreams of delusional grandeur and spiritualized American jingoism . . . spiritual imperialism as if the kingdom of God depended on America’s being revived.  We do not believe it is in God’s agenda to make the USA a theocratic righteous nation.

Will we ever learn?  Can love really conquer hate?  Will light ever displace darkness?

David wrote/prayed in Psalm 18, “Your gentleness has made me great.”

The gentleness of Jesus is the high way—God’s way—to kingdom rule, the reign of Father and His sons in all the earth.

The Doctrine of Dominion

The authenticity of the Church is rooted in the nature of Christ and the Spirit as sent of God to bring about redemption and reconciliation in all of creation.  Jesus Christ, the Anointed One, was sent into the world that the world through Him might be saved.  His Spirit was sent into the world to birth and empower a royal priesthood, a holy nation commissioned and anointed to go and make disciples of all the nations.

Neither armor-bearers nor governing intercessors battling for America are parts of The Great Commission.  Rather we are to be sons of the kingdom making disciples of all nations.