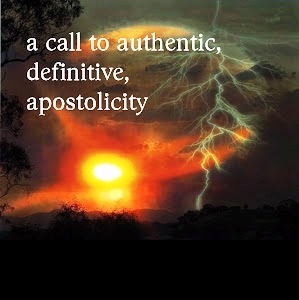 Apostolicity is a word that has been discussed and defined both in Catholic and Protestant Reformation contexts for many years.  It does seem that, in my lifetime, its meaning and essential role have emerged well beyond institutional implications and applications.  Most, if not all, would agree with this simple definition:

Apostolicity:  “Having to do with things apostolic; matters concerning apostles.”

In biblical language apostles are those who have been sent out to perform a task in the name of another.  They are endowed with the authority and freedom to act authentically on behalf of the one who sent them.  Apostles in the New Testament are witnesses to the risen Christ who are explicitly commissioned by Him to spread the gospel of His resurrection and kingdom to the world and to promote, in His name, the active presence and power of God’s Spirit both in and among His people.

Briefly, apostles are to be what God’s intention is for His entire royal priesthood: first incarnational, and second missional.  Their life example is to uncover and reveal the abiding Christ in such a way that others come to faith in the risen Christ who has returned in the Spirit to make His abode in those whom He has raised up to sit with Him at the right hand of the Father in heavenly places.

The Apostolicity of the Church

Their objective is one holy and apostolic church manifested in every geopolitical sphere, thus filling the earth with God’s kingdom and glory.

Apostles’ greatest credential and confirmation of their apostolicity is love, the central theme of their lives and writings.  To misunderstand this is to misunderstand God who is love.  The end of their mission is a universal church that incarnates God the Father in the Person of Jesus Christ as He is revealed by the ongoing life of the Holy Spirit in a chosen, called out, set in and sent people.

The Final Outcome of apostolicity will be a new heaven and a new earth.  The ongoing process is a holy city, New Jerusalem, coming down out of heaven from God, made ready as a bride adorned for her Husband.  This is an unfolding and emerging mystery being revealed through relationships, a way of life for those who are seated in heaven—with their minds set on things above, and with their feet on the earth—walking in the steps ordered for them.

And I heard a loud voice from the throne, saying, “Behold, the tabernacle of God is among men, and He will dwell among them, and they shall be His people, and God Himself will be among them.”

God is all about going.  Pursuing.  Seeking.  He always has been.  From the beginning, God has been seeking a way into our human existence to show us who He is.  He is the demonstration, the pattern and the example of true apostolicity.