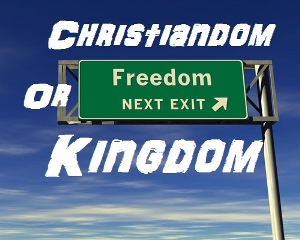 When Jesus ministered on the earth he focused on relationships and people, not on institutions and programs. Moreover, he did not not view people as a project or a means to help him advance his ministry. In fact, in John 6 when the crowds seemed to be at their largest, Jesus started filtering out the crowds by challenging them to be radical followers of him–not his ministry or his blessings or a religion–but of him. He focused on his Father and on the people and he challenged the people to be focused on him.

Interestingly enough, the people who were willing to focus on Jesus were those who had no institution or religion or position to protect. They were people who had no agenda for the acquisition of worldly fame, fortune, or position. They were people who were not concerned with holding on to what they had because they either had nothing or they had come to realize that what they had attained and acquired had left them empty. The people who came to Jesus were the ones who were captivated by his winsome and likable personality. They liked to be around Jesus. Whether they were rich sinners like Zacchaeus or a poor prostitute like Mary, they liked hanging out with Jesus. They were also captivated by his message. He never condoned their sin, but neither did he condemn them. He always gave them the truth but with abundant grace. In fact, his winsome character and perfect combining of grace and truth made them want to leave sin behind–it wasn’t egregious to think about following Jesus–it was a joyful thing. They actually wanted to turn from their sin to step into the real joy and life that Jesus had.

Seeing the life of heaven in Jesus gave the people hope that they too could have that life. They never had any sense that they couldn’t measure up to his kind of life. Following Jesus did not lead them into a bunch of rules or religious bondage–it led them into freedom. Jesus had come into their world and brought his world to them and showed them they could have his world here and they gladly embraced it–not to escape hell but to step into life and freedom now. They realized that in following Jesus they weren’t escaping something–they were stepping into something–they were stepping into a new kind of life–the God class of life.

Those early followers of Jesus didn’t understand doctrines. The knew nothing of the cross, the Trinity, or substitutionary atonement. Their spirituality was not measured by the length of their quiet time. They didn’t read the Bible 30 minutes a day because they didn’t have Bibles in their homes. They were simply following a man–a man who had captivated their hearts and imaginations.

After Pentecost, it was pretty much the same way. The people who came to Jesus were in love with God and with this man who met them where they were and lifted them into a new level of life–they were in love with Jesus. Along the way they began to learn about the atonement, the Trinity, the gifts of the Spirit, etc. But they never stopped following the man Jesus Christ. The people of the Way were Christ centered. They followed a person, not propositions. Their only agenda was to live with him through the Holy Spirit and allow him to do what he wanted to do in them and through them. Their only agenda was to love him and to love others as he loved them. Theirs was a kingdom agenda.

Somewhere along the line all of this slowly and subtly changed. When and where it changed doesn’t really matter. What matters is

that changed. It also matters that we be honest about this change and recognize that the contemporary church for the most part has lost the agenda of the kingdom and substituted it for a Christendom agenda.

Christianity was the word that came to be used of the fluid and spiritual movement populated by those whom pagans mockingly referred to as Christians because they lived and acted like the Christ. Christendom is the institutionalization of that movement. This institutionalization involves ecclesiastical structures (how we “do” church) as well as theology and our orthodox belief system. Even more, the advance and development of Christendom resulted in the almost complete westernization of the Christian movement.

The result of the westernization of Christianity, with the accompanying Americanization of the movement during the American century, is that most American believers now unwittingly go about their Christian lives with a Christendom (read that American) agenda rather than a kingdom agenda. Even those who are not Americans engage the world through the institutionalized and propositional structures of Christendom rather than from a kingdom perspective.

Think about it for a minute. Christians are rightly opposed to the homosexual lifestyle and gay marriage. But how many Christians actually get out of their Christian bubble long enough to build relationships with gays and lesbians? When was the last time you had a few homosexuals over to your house for dinner and let them know that while you don’t agree with their lifestyle you still love them and will stand with them as a friend if and when they are the victims of gay bashing? It’s probably been awhile–if ever for most Christians. Instead, Christians feel that they must militantly stand for the truth. Ok. Stand for the truth–but with grace and with the love that bears all things and never fails.

Christians rightfully oppose abortion. But how many Christians support government programs that will provide financial assistance for the single woman who decides not to abort her baby? Instead, most Christians want the government to cut its spending starting with such welfare programs. Many even argue that government support for these fatherless children (otherwise know as orphans in the Bible) will only encourage pregnancy outside of marriage. Oh really? Have you ever studied history? Babies have been being born out of wedlock for centuries–long before government welfare programs started. Where is the love of God in this?

Christians are opposed to illegal immigration and want all the illegals out of the country. I believe that a nation should control its borders, but the United States has had lax border control for decades–even under Republican administrations. Many undocumented foreigners were brought to the US as small children by their parents and this is the only home they know. Moreover, millions of them are followers of Jesus and hold strongly to biblical values. Yet many Christians today insist on sending them back to a country they do not know and where they really don’t speak the language. Have we forgotten that the Old Testament clearly required the people of God to give special care to the foreigners in their midst? Jesus called for mercy over the sacrifice that the law requires. That same call is faint to nonexistent in the Christian evangelical camp today.

What I’m saying is that today many Christians base their opinions more on their political persuasion than on the Bible. They then baptize their opinions with a few scriptures that prove their point. Moreover, they then feel obligated to fight and be militant for the truth. And in all this, they miss the heart of God. God’s heart is love. Yes, Christians should speak the truth. But we must cover that truth with the grace and love of God. When homosexuals and abortionists are confronted with the love and grace of God, they may or may not accept the truth. But at least they will know that we care about them–at least they will be given a genuine revelation of the real Jesus and not the politicized, conservatively correct Jesus. When the politicians discuss illegal immigrants, the message that they hear from Christians should be one of mercy and forgiveness not a demand for the letter of the law even if it means uprooting or dividing families.

A Christendom agenda demands that our western institutions and western way of life be protected at all cost. Such an agenda connects spirituality with a baptized defense of these institutions. A kingdom agenda, however, demands that believers address cultural and moral issues with the same love, grace, mercy, and forgiveness with which our Lord has shown to us.
The kindness of the Lord incarnate in us will lead to repentance. If the church continues to embrace a Christendom agenda, the darkness will continue to prevail. But if we will begin to embrace a kingdom agenda in which the love of the Father overflows out of us onto others, then the light will shine in the darkness and the darkness cannot prevail. A kingdom agenda is our only viable option.

This is our message. This is the foundation of all we believe and teach. That we have not had the maturiy to say it with love is true. Most of us have been licking our wounds from the pain and suffering we recieve as we pulled out of the orbit of the institution and its systems. Its time to rise up healed, wiser and focused to see the Kingdom advance in our lifetime. JLB

What do you think?