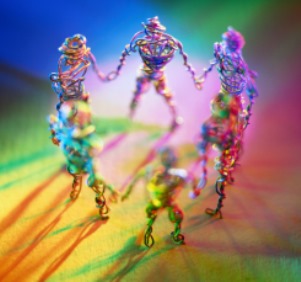 Jesus’ Church is the glorious Church without spot or wrinkle (Ephesians 5:27) Jesus’ Church is all powerful. The gates of hell are unable to withstand it.(Matthew 16:18) Jesus Church is destined to become a beautiful Bride for Jesus, and she will have “made herself ready.” (Revelation 19:7) Jesus Church will become a glorious city, the New Jerusalem, coming down out of heaven. (Revelation 21:9-11) Jesus’ Church is precious because it’s a purchased possession. It belongs to God and it’s where He lives. (1 Corinthians 6:19-20) Jesus’ Church is made up of all those who have surrendered everything to Him,making Him the Lord and Master of their life. (Matthew 16:24-25) Jesus’ Church consists of those who are in Christ and He is in them. Christ shines out of them. They are Christ Bearers because they have been truly “born again.” (John 3: 5-6) Jesus’ Church is a “new and living way” compared to man’s efforts to build His Church which is often attempted using natural human wisdom. (Hebrews 10:20) Note what the Apostle Paul wrote speaking of God. “For it is written; ‘I will destroy the wisdom of the wise, and bring to nothing the understanding of the prudent.'” (1 Corinthians 1:19) Jesus’ Church will never be built using man’s natural abilities, training, qualifications, status, experience, eloquence, or leadership skills. If these are not surrendered at the Cross they are useless in building Jesus’ Church. More often than not, they have a detrimental, tearing apart, effect. (1 Corinthians 1:19-31) Jesus’ Church will rule and reign with Christ for 1000 years and then forever.(Revelation 5:10; 20:6; 22:5)   GOD IS CALLING – ANYONE LISTENING? Can you hear Him calling? “Home is where the heart is” the old saying goes. Where is your heart in relation to God’s intention for Jesus’ Church? Are you longing for what God and Jesus want or would you rather settle for the “status quo?” Like people down through the ages, most people seem to be “blind” and “deaf”. Satan has deceived them. He has deceived the whole world. (Revelation 12:9) Jesus repeatedly shouted it while He was on earth, “He who has ears to hear, let him hear!” (Mark 4: 9 for example). And today we are no different. Let’s face it. When we allow our traditions and our preoccupation with material things to dominate our thinking, we, like all generations, can’t “see” or “hear.” Listen to what the Apostle Paul said, quoting from Isaiah 6:9-10 and recorded at the end of the Book of Acts: ” Go to this people and say; hearing you will hear and not understand; and seeing you will see, and not perceive; for the heart of this people has grown dull, their ears are hard of hearing, and their eyes they have closed, lest they should see with their eyes and hear with their ears, lest they should understand with their heart and turn, so that I should heal them.” (Acts 28:26-27) This is the core issue facing our generation. We can’t “see” or “hear” and have grown dull. In so doing we are resisting the Holy Spirit. (Acts 7:51) God is longing for His people to become ONE temple, so He can come and live in them. (John 14:23) Only that which comes from Christ can be called the Body of Christ. (1 Corinthians 3:11-17) To loosely use the term “Body of Christ” to describe all the Christians in the world or a location is a misnomer. It is only that which is of Him. And it does not necessarily include everyone who once prayed the “sinners prayer” so they could escape “hell” and one day go to heaven. It’s a “new and living way.” His Church is only made up only of those who have truly been “born again” by the Spirit. (John 3: 5-6), and those who are led by the Spirit. (Romans 8:14) Everything else is a facsimile and pseudo. DIVISION – SECTARIANISM Let’s face it… Satan is violently opposed to God’s plan to have a family of born-again sons on earth who would:

For 2000 years Satan has influenced men to be divided over and over again into segregated clusters of denominational and independent, sectarian groups. To put it bluntly, what we have today is an estimated 34,000-38,000* separate sects! (If you are offended with this statement check your dictionary for a description of a sect). Satan started his “divide and conquer” strategy in the garden with Adam and Eve by causing them to disobey God and lose their relationship with Him. He did it with their sons Cain and Abel causing Cain to murder his brother. He did it at the Tower of Babel, and with Jacob and Esau, Joseph and his brothers, David and his son Absalom, and he has never stopped his tactics over 6000 years of human history. We are still dividing, splitting, and planting more and more separate independent churches. Satan is paranoid about anything that resembles unity. This is why Jesus said He would build HIS Church (ekklesia – called out ones), and the gates of hell would not be able to prevail against! (Matthew 16:18) HIGH TREASON For 6000 years man has repeatedly and consistently committed high treason against God and His Kingdom purposes. For the last 2000 years, despite what Jesus did on the Cross to cancel out Satan’s plans, man has continued to commit high treason by working to make a name for himself in the Christian world. This being more important than lifting up and exalting the Lord Jesus Christ. When we persist in

planting more and more churches with independent names and logos on them, we are betraying and making a mockery of Jesus shed blood. Precious blood was shed to gain the Church as One Body and Bride. WHY OVER 6 BILLION PEOPLE CURRENTLY DISBELIEVE Our reason for building and continuing to build 34,000-38,000 separate church systems is the reason why the vast majority of people on planet earth can’t believe. Remember Jesus’ prayer in John 17:21? He prayed to Father for unity (oneness), “… that world may believe you sent me.” By building churches and making a name for ourselves, we are just like those who built the Tower of Babel (Genesis 11:4). Remember how angry God got with them?

Where is the Real Church?

This is what we’ve achieved in our day:

(1 Corinthians 15:9) He also said, “I have been crucified with Christ; it is no longer I who live, but Christ lives in me…” (Galatians 2:20). How often do you hear our modern celebrity teachers using words like these?

LIKE THE APOSTLES, WE MUST EMPHASIZE THAT JESUS IS THE HEAD OF HIS CHURCH It’s absolutely vital that we understand what God’s intentions are, as given to us in scripture. Everything else is superfluous and an anathema to God. God intended before time to sum up everything in Christ, and the Body of Christ (not 34,000-38,000 separate, independent, churches). This is central to His plan. (Ephesians 1:9-10) Jesus will build His Church if we will let him and that which is not of Him will be judged. Jesus defines it as lawlessness. (Matthew 7:21-23) He is waiting on you and me to cooperate with Him, and His waiting is because of His grace. But we must not presume upon His grace. He will work with those who are totally committed to Him and not with those who have their own agendas. Beware if you do. On and given Sunday (or Saturday), millions of sermons will be preached that are largely lifestyle orientated feeding the “I want, it’s all about me” generation. The sad indictment is that Jesus either gets little mention or, none at all. Subtly we have replaced Jesus with our own “gospel.” Jesus is the centre of the universe. Nothing was made apart from Him. In Him everything exists. And you are invited to be a part of Him. He in you, and you in Him. We are called to be the literal Body of Christ, not just nice Christian people who go to church every weekend. Actual Christ Bearers living and going about our daily lives bringing change and transformation though His life. (John 7:38) The world is waiting (desperately) for the REAL Body of Christ to stand up. A CALL FOR REPENTANCE “Strip yourselves of your former nature (put off and discard you old un-renewed self) which is characterized by your previous manner of life and becomes corrupt through lusts and desires that spring from delusion;… Therefore, rejecting all falsity and done now with it, let everyone express the truth with his neighbour, for we are all parts of one body and members of one another.” (Ephesians 4:22-25 AMP) IT’S TIME (PSALM 102:13-18) It’s time for there to be ONEChurch in every city on earth. One Church with Jesus as Head, administered by elders who don’t “lord it over” the flock but who shepherd them. For anyone who calls themselves a Christian it is futile and foolish to be doing anything that is contrary to God’s will. Jesus WILL have ONEChurch. It’s time for all those who are truly born again to leave and cleave to their beloved Lord! HE WHO HAS EARS TO HEAR, LET HIM HEAR! He is calling…anyone listening? (Ezekiel 3:10; 12:2; 40:4; Proverbs 23:19; 22:17; Matthew 11:15; 13:9; 13:15; 13:43; Mark 4:9; 4:23; 7:16; Luke 8:8; 14:35; Revelation 2:7, 11, 17, 29; 3:6, 13, 22; 13:9) Soberly, David Drew A servant of Jesus Christ www.JesusChurch.info * An internet search will show research groups who estimate that there are 34,000-38,000 separate Christian denominations, independent churches and cults in the world.