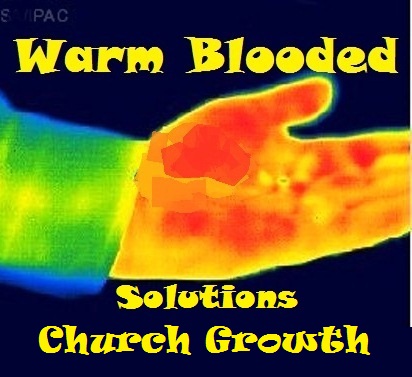 Recently I had the privilege to be invited to visit an Afro-American church in the area to “share my expertise” since they were told by a prominent young leader that I was involved in advertising. The prominent young leader, “Harry” we will call him, is one of my disciples, but no one but his wife knows he comes to me for advice because of my reputation in the city for having “non-standard views” concerning the institutional religious system. Nonetheless, because of Harry’s relationship with the high ranking brass, I was allowed in so I could share my advertising wisdom for free.

I was introduced to the young woman who was running operations, and she took me in to a room with every piece of 21st century computer and video gadget at her disposal. The new advertising program they brought me to see was story boarded on the wall, and I was amazed at the work involved in the preparation. She was preparing a “project” as she called it to get more people to hear “the Bishop’s” new video series. She obviously meant well, but I could tell she had no clue. At first she was a little cold not knowing why I was overlooking her work, but she soon changed her tune when I spoke with knowledge and praised her work. Everyone needs affirmation and especially in ministry.

After looking everything over they informed me that “the Bishop was in” and offered to let me “meet the Bishop” like if somehow I had just got a free pass to meet the President. I didn’t want to be rude so I just went along with their immature obsession for a man and responded, “Oh, wonderful”.

I was led in this large room with beautiful furniture to wait on “the Bishop”. He came in as soon as I sat down and everyone stood as he entered and began to run around him. I thought for a minute I was watching the series Shaka Zulu the way they responded to “his imminence.” Again I didn’t want to be rude so I stood up to greet him and thank God even though we are in the same part of Florida, he had not heard of me.

He was dressed to the max. I saw the lines in his suit were definitely tailor-fitted to accentuate his ex-basketball physique. He spoke perfect kings English, so I guessed he must have attended some Ivy League college up North. Three people hurriedly worked on his coffee, and one was allowed to take it to him. He never saw who handed him the cup and never looked up to thank them.

He was very personable, but wanted to get right down to it. What do you think of what we are doing? He said. Well, I said, you definitely have the best of equipment and your advertising people are very talented, but I have some questions for you. I said, do you mind if she sits with us at the table? As I pointed to the advertising guru he had hired for his “project.” He said no, and she was quickly ushered to the “special” table where I was seated.

Again trying to be respectful, I asked the first question to him as the guru lady listened in. Would you say that at least 30% of your congregation is social media and computer illiterate? He responded “probably more” which shocked guru lady as most of her “project” depended heavily on the internet. I said nothing and continued with my questions.

Why did you do this video series and how would you measure it as successful project? From my experience, I already knew the answer, but I wanted guru lady to hear it. She had earlier told me that she thought his intention was to provide a teaching series to his congregation. He quickly responded “with church growth” of course, I would measure it by how many new members had joined as a result of the videos.”

I saw guru lady out of the corner and she had this “Oh my gosh” look on her face while I felt this familiar pain in the gut of my stomach.

It is so easy in this world to measure success by numbers and how confused we are that we think we can throw professional talent and big bucks at a problem which really needs a spiritual solution.

I thought to myself;

What are the best Church Growth Solutions?

Isa 33:21 But there the majestic Lord will be for us A place of broad rivers and streams, In which no galley with oars will sail, Nor majestic ships pass by NKJV

Out of respect for the Lord’s work and the kingdom, I knew I could not respond to him in front of them so I asked if we could sit privately. He seemed to “feel me” and quickly asked everyone to leave.

When we got alone I told him if he really wanted to grow the church, he needed to throw a warm- blooded solution to the problem. He responded with “explain that,” and you know me, no matter what it costs I am going to tell the truth. His whole issue was the slowly dwindling Sunday night service attendance. I told him he needed to train his leadership on Sunday night and release them to minister to the flock that is hurting and experiencing financial troubles throughout the week.

I told him a holiness video series with pressure to attend church services was not the answer. I told him it’s not sin that is keeping people away from services, it is life. I told him, life has become harder for many, and the church refuses to adjust to the need.

I told him God’s people are not there to make numbers to listen to him on Sunday night, but that he is there for them. I knew I had started meddling, but he was listening and I wasn’t holding anything back. I said a few more things about warm-blooded solutions and the way the church is supposed to work, but I could see that we were not talking the same language. Well, he quickly thanked me, and said he had another appointment and escorted me out of his office.

Will he ever “see” what I was saying? I don’t know, but he heard it. What will it cost him to obey God? Everything he was trained for and everything he has. Much too high a price for many!

20 ‘Then it shall be in that day, That I will call My servant Eliakim (God is setting up) the son of Hilkiah;

21 I will clothe him with your robe And strengthen him with your belt; I will commit your responsibility into his hand. He shall be a father to the inhabitants of Jerusalem And to the house of Judah.

23 I will fasten him as a peg in a secure place, And he will become a glorious throne to his father’s house. NKJV

As I walked out of “the church” I said a prayer for “Harry” and that somehow how I got there would be forgotten. Guru Lady will be fine but as soon as her best business practices and advice don’t work she will be fired. As for the enterprise or company they called “the church” it will continue to dwindle till they have to sell the building. I will probably see “the Bishop” selling suits at some men’s store soon and God will have to raise up a new generation to take care of his people.

The warm-blooded real church of the Lord Jesus Christ continues to grow and not by any human concocted means taken from the business world!

So my recommendation is don’t try to figure out which congregation I am talking about and instead ask Him what He is saying to you through this trance or revelation.

Jose Bosque is Editor in Chief and founder of Viral Cast Media which oversees GodsLeader, JaxChristian now ViralChrist and 15 other websites. He has ministered in Jacksonville since 1987 and served the city since 1992 as a citywide servant leader. Jose is considered a resource and a spiritual father to many leaders in the city and in the 71 nations where the Lord has sent him to serve. Originally born in Cuba, Jose has resided in Jacksonville since 1966.