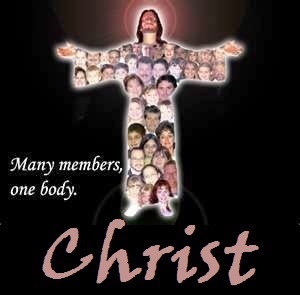 Recently, some have recognized the impotency and wrongness of the existing state of the churches and are endeavoring to remedy the situation by reuniting divided denominations. They seek to form an alliance of all churches into one ecumenical Church. However, this movement, too, is obviously doomed to failure and the very effort to unite the churches seems likely to end only in the formation of yet another great sect or denomination. I say this because the churches involved are not reestablishing the true center of Christianity but rather are still caught in the sectarian spirit inherited from Catholicism.

The Ekklesia (translated “Church” in the English edition of the Bible) is the Body of Christ. Composed of many members–each connected directly to the Head in Spiritual life-union and possessing different gifts and functions–this Body is a spiritual organism. Being a single, corporate, spiritual entity–one Body–the Ekklesiawas never intended to be divided and simply cannot live and function properly in a divided condition. Yet this is the obvious condition prevailing today.

What is at the heart of all this–what is wrong? Where is the true unity of the one Body of Christ? The answer is simple, yet profound. The confusion and disaster of sectarianism is the result of mistaken and false ideas as to the center, or essential nature of the Ekklesia.

Getting Back to Christ The True Center

The center of Christianity is neither institution nor organization. Nor is it even the Bible itself, as the reformers made it, for the Ekklesia existed before the formation of the New Testament canon. Christians were in fellowship with God and one another, centering their faith in Christ, long before there was any accepted New Testament.

There is only one center of Christianity, and this center is spiritual fellowship with God through Christ–life union with God in Christ. When there is this koinonia, there is the Body of Christ, the Ekklesia. Where there is no koinonia with God there is no Ekklesia, because the life-union is lacking. Though there be many excellent clerical personages, many elegant church buildings, many scholarly dogmas and creeds, if there is no koinonia with God and Christ there can be no Ekklesia at all. On the other hand, if there is this koinonia with God and Christ, the Ekklesia exists–we need pay no attention to the differences of creeds, institutions and rituals, but by loving one another can be one in Christ.

Only this union with God in Christ can be the center of Christianity. The Scriptures confirm this, because this fellowship is the theme of the whole Bible from Genesis to Revelation. Indeed, the relation between the Father and the Son in eternity was undoubtedly just this fellowship.

John tell us that “in the beginning was the Word, and the Word was with God.” This “with,” the Greek pros (and not sun or meta which have other emphases) describing the state of being in the presence of a person, is best expressed by “face to face with God” as Williams translates it. Just as the last Adam was thus from the beginning pros God, so the first Adam was created for the same position of fellowship, and was “face to face” with God in the Garden until the fall.

This is why God created man in His own image. Though the whole creation was “very good” in His sight, still God must have felt very lonely as He found not one among all the creatures with which He was able to have fellowship. All the animals, birds and fish were certainly very beautiful, but they could not come to God and talk and walk with Him in the Garden of Eden. Therefore, He created man in His own image, i.e., able to talk with Him, to meet with Him, pray to Him, and seek after Him. To live with God and to have fellowship with Him was the sole object of our being created in the likeness of God.

This communion must ever be the center of the relationship between God and man. Of course, the universe is beautiful in itself, but without the existence of human beings God could never be satisfied. God created man in His likeness, a spiritual being capable of responding to His love and having koinonia with Him.

God is Love! If there were no creature who could appreciate His love and respond in love, His creation would fail to reach its fullest consummation. Even when Adam was driven out of Paradise by God as a result of his fall–the communion broken by sin–this judgment was not to destroy man but to ultimately save him from his fallen state and restore the broken fellowship. God revealed Himself to Noah and his family to save them out of the Flood. He selected Abraham and his descendants as His chosen people, disciplining them to fit them for fellowship with Himself. How often God appeared to Abraham and talked with him, until he became known as the “friend of God.” This is nothing else but koinonia.
Windows 7 Clé

God continued to appear to the people whom He sought to know–to Isaac, Jacob, Moses and the children of Israel. Leading His people out of Egypt through the wilderness of Sinai, God very often appeared to them as they traveled through the desert. [He had them build the Tabernacle, and later the Tabernacle of David, and finally the Temple, so as to have “just” (righteous) ground for communion with them in the sacrifices.

In fact, one of the most strategic verses in all Scripture is Leviticus 26:11, 12 where the Lord said to Israel, “I will set My tabernacle among you, and my soul shall not abhor you. And I will walk among you and be your God and ye shall be My people. This verse is quoted by the apostle Paul in 2 Corinthians 6:16 as referring ultimately to the Body of Christ and by the apostle John in Revelation 21:3 as being finally, prophetically fulfilled in all the fullness of its rich meaning when the ‘New Jerusalem” comes down from God in heaven, prepared as a bride for her husband.

Afterwards God had fellowship, or koinonia, with David, and later with the prophets. In this way God continued to have spiritual union with mankind in the person of these representative men. However, God was not satisfied to have fellowship with only those selected few. He wanted to be united in spiritual fellowship with all the people on earth. Even His choice of Israel as His elect people was only the first preliminary step to salvation for the whole of mankind.

To accomplish this purpose, God ultimately sent His only-begotten Son to earth–“For God so loved the world that He gave His only-begotten Son, that whosoever believes in Him should not perish but have eternal life.” Jesus became “the Lamb of God who takes away the sin of the world,” paying the penalty of man’s rebellion against God, to make it possible to re-establish man’s interrupted fellowship with his Creator. Thus, we have “boldness to enter into the holiest, by the blood of Jesus” (Heb.10:19).

Fellowship between God and man, interrupted by the sin of the first Adam, was reopened by redemption bought with the blood of the last Adam. Now anyone can have direct koinonia with God and share His very life–anyone can live a life of love and unity with Christ. This is really the center of Christianity, and “faith” is nothing other than the state of having this life union with God. To be justified by faith means that God has access to repentant sinners through Christ and is thus able to enjoy this koinonia with them. If we will practice this living union with Christ, loving each other without any concern about sects and denominations, doctrines or forms, then we shall have the Body of Christ with Him as Head. This is the Ekklesia in its truest and purest sense. Therefore, the Ekklesia is not an institution, not a system, not theology, not the words of the Bible, and not any ritual or ceremony. The Ekklesia exists where there is this life union with God through Christ.

Chapter 4 from the Book One Body in Christ by