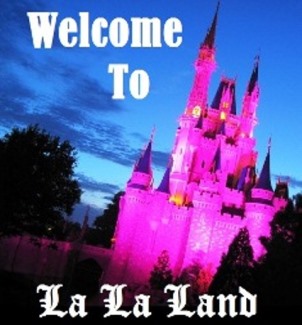 It is 2am in the morning, and how I wish the Lord would let me sleep! Father, why don’t you do your downloads during daylight hours? The truth is I know the answer. Our minds are too busy to get a clear signal so He speaks when there is no traffic.

What I share today comes from 16 years of being king of my own La La Land experience. I was sincere, I was zealous, I was diligent, but I was wrong. Judged by men I was a star to be followed ,but judged by the Lord I was a poor plastic copy of a religious system puppet. I share this to let the readers know I tread lightly when I share what I am about to write.

I know I will be making some generalizations and there are pockets of Light all over this world, but in general the Church has been, is, and will continue to be ineffective for another 2000 years if we do not repent and return to the true Gospel of the Lord Jesus Christ.

In essence the Church is living in what I call La La Land. It’s Disney Land and Magic Kingdom Park rolled into one. America is a post Christian nation! Don’t fight it! Don’t reject it! Deal with it! We have lost at least two generations, and we are rapidly losing another. We need to quit trying to change the culture! We are the ones that need to change. We need a baptism of love and a Tsunami of mercy and compassion.

We have lived in La La Land so long we are out of touch with the culture, and worse we are out of touch with the myriads of hurting people who are captive to this present age. While we fight, argue, and divide over doctrine, the enemy is tearing into the people like sharks around schooling minnows. The wounded are everywhere, and while our buildings are everywhere too, the nature of Christ, His essence, His perfume is sadly missing.

Here are the reasons (the modern church world i.e. La La Land) we have been and are ineffective:

We have followed business concepts and created our own brand of Jesus. It is a world that has no effect on the culture. It’s sterile. It will not reproduce because it’s not real.

We have done a great job emphasizing the “they are not of the world” part. So great that we only send people into the world to take them out of the world and put them into our La La Land. While each congregation has developed its own theme, it’s still La La Land. The rides, the colors, and the people may be different, but it is still make believe. We have developed our own “sanitize to my theme spray,” and should you enter looking and acting different, you will not leave without the “First Happy Church of the True Believers” makeover.

Those living in La La Land are instructed weekly to sanitize their environment. To do this they must first judge, then alienate from the very people we were left in this world to help. The average La La Land member has no non-Christian friends, so in essence he has been sterilized from having an effect on his culture.

It is not the real world people! Wake up!  Jesus needs spiritual paramedics who can minister to the mess in the mess, not transport people back to La La Land to live with all the other unrepented, unforgiving, self-centered and self-righteous “aints”.

La La Land only attracts and keeps emotionally needy people. They want to be told what to do. They are not free thinkers. They want the La La Land Life, but it’s a mirage that only works within the four walls. So at the end of every service they line up to talk to the king.

Sunday after Sunday La La Land and her system make spiritual eunuchs. They are “Spiritual Junkies” that live needy for their Sunday morning fix. Is this selfish culture any different from selfish church members who “go to church” to “get a word” or “get their praise on” in the service? They are addicted and their mini-kings are addicted to being needed! God Help us!

They return to the world on Mondays with two choices. They either run from it by creating a false spiritual vacuum (like La La Land) around themselves, or they are lured away and enticed by what the political propaganda puts out through FOX news or CNN. In either way the enemy wins, and the culture goes unchanged. This religious system only makes La La Land clones, not disciples of the Lord Jesus Christ.

In La La Land you cannot share your heart. You must toe the line to the mini-king’s wishes. To be a team player means to sell your soul and your possessions to La La Land. La La Land is full of rules and do’s and don’ts because spiritual eunuchs can’t hear God for themselves.

The more religious La La Land is the greater the hypocrisy.  There is no place in La La Land for honesty. A failure in the ranks is against the rules. To publicize failure means to publicize that La La Land doesn’t work, and oh my God maybe this Sunday morning’s charade isn’t real!

People and leaders (the king’s yes men) disappear in La La Land without explanation.  Nobody asks because it is not kosher to ask. Just keep smiling and keep giving even if you are dying inside.

This is why in the church today pornography, homosexuality, fornication, adultery, pill addiction, gluttony and divorce are rampant.

Then one of the Pharisees asked Him to eat with him. And He went to the Pharisee’s house, and sat down to eat. 37 And behold, a woman in the city who was a sinner, when she knew that Jesus sat at the table in the Pharisee’s house, brought an alabaster flask of fragrant oil, 38 and stood at His feet behind Him weeping; and she began to wash His feet with her tears, and wiped them with the hair of her head; and she kissed His feet and anointed them with the fragrant oil.

This woman is out of order! This is not the official La La Land worship style! Jesus receives no worship from dirty sinners like these. Only holy saints can worship! She is making us uncomfortable. Where are the ushers and the king’s security detail when you need them?

In La La Land you are taught to concentrate on others sins, not you own. But Jesus was not going to let them get away that easy!

Luke 7:44 Then He turned to the woman and said to Simon, “Do you see this woman?

Hypocrisy is too busy judging to repent or have mercy. Hypocrisy can’t handle such violent acts of honesty. Honesty like that will ruin the formalism in our gatherings now turned “services”!

4. La La Land doesn’t  feed the Need of this Culture-

It doesn’t feed the need because it alienates the world and judges the culture. It doesn’t provide a valid overcoming lifestyle which can move in and transform the culture with a compassionate heart and a merciful spirit.

This culture wants it RAW! This means they are tired of scripted lines, professional musicians and Christian entertainment. They want reality. They don’t want La La Land. It does not work. It is fake and a poor excuse for the life of Christ.

La La land is waiting to get taken out of here. The present religious system is just “polishing brass on the Titanic”. The people need help to stay and overcome in this life, not just run away into a virtual La La Land that doesn’t exist outside the four walls.. They need help telling their lesbian daughter who grew up in La Land; they are going to love her through this season. They need help confronting their son who is sleeping with the deacon’s daughter. They need help when the mini-king is not around to kelp them say no to their supervisor when he offers them a promotion for sex.

Yes, this is a dirty world and a degenerate culture, but Jesus has not given up on this culture! He weeps over their pain and the results of their sin. He loves them unconditionally and has not set up a barrage of conditions and obstacles for them to have to jump through to abide in Him; not like it is in La La Lands buildings.

We need to quit inventing new yearly prayer gatherings which resemble the unity in Washington and have no effect on our cities. We need repentance! We need an awakening to our miserable state. We need a visitation of honesty followed by a baptism of humility.

We can’t patch up La La Land. She will not repair! We need a full demolition and a new foundation! We need to quit lying to ourselves about our alignment to the foundational principles of Christ.

Until then I sound the alarm and I pray. May God be merciful because this world will not be! I am going to bed!

Many of you are trying to repair the church from within. You are not more loving and more merciful than God. Be honest with yourself! Can you not handle the rejection? , Can your ego not handle the loss of position?, Do you not trust God to provide for the loss of Income? Are you afraid of the lonely, narrow Way? Do you really believe the Lord will allow you to repair the mess from the inside? Did the Father send His Son into the the synagogues or into the highways and byways full of those rejected and despised by society? Will the Lord build on anything where His Son is not the cornerstone? Did the Son die on the cross to pass out titles and promote men and their ministries? NEVER. Band aids can not heal LA LA Land! Soon LA LA Land with all its budgets and buildings will come crumbling down. I pray you don’t wait till then to rightly align yourself with the Lord instead of men.

Heb 13:13-15
13 Therefore let us go forth to Him, outside the camp, bearing His reproach. 14 For here we have no continuing city, but we seek the one to come.
NKJV