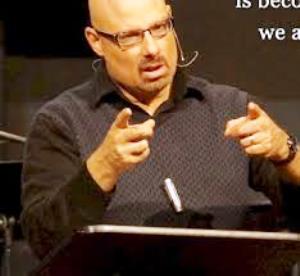 You would think by now that most people would understand these terms but not so. Most Church Leaders still see the organic church as something of a fad to hitch your cart up to. The reality is nothing organic can live with something that is birthed out of a human even a human with good intentions. Editor Jose L. Bosque I’ve been using the term “organic church” since 1993. In my book Reimagining Church, I point out that T. Austin-Sparks is the man who deserves credit for coining this term. Austin-Sparks ministered in the 1920s until his passing in 1971. When I began using the term “organic church” over 16 years ago, very few people were using it. (The exception would be those who were familiar with the work of T. Austin-Sparks.)

Today, the phrase has become a fad. It’s become a clay word, molded and shaped to mean very different things by many different people. Consequently, one must now carefully define what they mean by “organic church” when they use the term. As for me, I pretty much stopped using it. I’ve often said that an organic expression of the church is one in which the members are learning to live by Divine LIFE together. They are learning how to live by the indwelling Christ. And out of that living emerges a particular expression. That expression, because it’s derived from LIFE, is “organic.” When the church is living true to herself . . . as an organism . . . her expression is organic.

The means and end is Jesus Christ. Christ is known deeply by a group of people who are discovering His infinite riches together and are making Him visible on the planet again. The New Testament knows no other kind of church. This is what ekklesia is. Some, wrongly I believe, have used the term “organic church” as a synonym for Christians who meet in a house (a “home church”). I’ve spent a lot of time discussing the differences between an authentic organic expression of the church and a house church (see my recent interview with Alex McManus for an example). Several statements (these are my own personal convictions, of course):

1. I wouldn’t give 2 cents for many “house churches” today. Many of them are far from organic (in the sense that I’m using the term). For that reason, I don’t endorse “house church” as a model. And I never have. The living room is not my passion. Many house churches, in my experience and observation, have no concept of how to live by an indwelling Lord. Nor are they consumed with Jesus. Christ is but a footnote to some other “thing” or “it.” This is the case with much of contemporary Christianity (just count how many times He’s mentioned in the typical sermon or gathering). Few know what it means to pursue the Lord Jesus with one another. I’ve maintained this observation for the last 13 years. Thankfully, more and more Christians outside the institutional church today are beginning to understand that ekklesia is all about discovering and displaying Christ together and that the engine, drive, and motive is to fulfill God’s eternal purpose – which is not centered on human needs.

2. The impulse to start a “movement” is something I’ve never endorsed. As a student of church history, “movement mentality” is very common. Paul of Tarsus didn’t attempt to start a movement. From everything I know about the first-century and the early church, this wasn’t on his radar. He planted between 13 and 14 churches in his entire lifetime. (Read that again, folks.) Paul was interested in quality far more than quantity. (Building with gold, silver and precious stone was his concern – see 1 Cor. 3). I have a lot to say about “movements” and the fruit they produce. I’ve discussed it a good bit in Finding Organic Church and the in the Threshold 2010 conference (which was recorded).

3. The goal of experiencing organic church life should never be the transformation of the world. Nor should it be world evangelization or church multiplication. The goal is the fulfillment of God’s eternal purpose in Christ – a purpose that is by Him, through Him, and to Him. A purpose where “the fullness of Christ” is the warp and woof. God’s eternal purpose is something very different from all of the above. (See From Eternity to Here for an unveiling of the eternal purpose.) Those who would stress the former as goals have adopted (often unwittingly) the mindset of D.L. Moody and J.R. Mott. I took dead aim at this mindset in my talk at George Fox Seminary last year, should you be interested in why I think it’s a out of harmony with the biblical narrative.

4. While some are trying to build movements (as many men have in the past), the movements surrounding house church/simple church today are very often shallow and posses little stability. This statement is based on my travels, observations, and many interviews with folks within these movements. I’m speaking in general terms, not about the exceptions. There is, however, a genuine move of God happening right now containing 8 characteristics. This “move” or “current” is centered on restoring God’s eternal purpose, His grand mission from forever to forever. That which has beat in His own heart from before time.

5. There is a lot of confusion within the missional church movement right now on the subjects of church, mission, and discipleship as well. As I see it, there are two major streams in the missional church movement that do not map to each other. This has added further confusion to the Body of Christ. What follows is an article I wrote some time ago answering the question: What is an Organic Church? I hope it adds some clarity in an area where massive confusion abounds. My hope is that this blog post would spread to those who would benefit from hearing it . . . especially those who are using these terms without understanding the history behind them . . . and that it would produce further examination into these matters. What I’m writing here of course is my view. Your mileage may vary. So free to chime in and correct my thinking. Bottom line: What I mean by “organic church” has everything to do with the Lord Jesus Christ.

I unfold this thought in my eBook and audio message entitled Epic Jesus. Since I left institutional Christianity twenty years ago, I have groped for language to communicate the kind of church experience I have lived in since that time. About fifteen years ago, I began using the term “organic church.” Interesting, this word has recently become somewhat of a clay word, being molded and shaped to mean a variety of different things by a variety of different people.

T. Austin-Sparks is the man who deserves credit for this term. Here’s his definition: God’s way and law of fullness is that of organic life. In the Divine order, life produces its own organism, whether it be a vegetable, animal, human or spiritual. This means that everything comes from the inside. Function, order and fruit issue from this law of life within. It was solely on this principle that what we have in the New Testament came into being. Organized Christianity has entirely reversed this order.

The phrase, “the organic expression of the church” was a favorite of Sparks’. I’ve yet to find a better phrase to improve upon it. By “organic church,” I mean a non-traditional church that is born out of spiritual life instead of constructed by human institutions and held together by religious programs. Organic church life is a grass roots experience that is marked by face-to-face community, every-member functioning, open-participatory meetings (opposed to pastor-to-pew services), non-hierarchical leadership, and the centrality and supremacy of Jesus Christ as the functional Leader and Head of the gathering.

Put another way, organic church life is the “experience” of the Body of Christ. In its purest form, it’s the fellowship of the Triune God brought to earth and experienced by human beings. To use an illustration, if I try to create an orange in a laboratory by employing human ingenuity and organizational skills, the lab-created orange would not be organic. But if I plant an orange seed into the ground and it produces an orange tree, the tree is organic. In the same way, whenever we sin-scarred mortals try to create a church the same way we would start a business corporation, we are defying the organic principle of church life. An organic church is one that is naturally produced when a group of people have encountered Jesus Christ in reality (external ecclesiastical props being unnecessary) and the DNA of the church is free to work without hindrance. In short, “organic church” describes a kind of church life that embodies the biblical teaching that the church is a spiritual organism and not an institutional organization. To put it in sentence, organic church is not a theater with a script. It’s a lifestyle-a spontaneous journey with the Lord Jesus and His disciples in close-knit community. An organic church can be contrasted with “institutional church.”

By “institutional church,” I mean a church that is created by human organization, chain-of-command styled leadership, and institutional programs. It’s marked by a weekly order of worship (or mass) officiated by a pastor or priest. It’s controlled by a top-down hierarchical organization and human social conventions (called “offices”) that people fill. The institutional church has often been called “the traditional church,” “the organized church,” and “the audience church.” Congregants watch a religious performance once or twice a week, and then retreat home to live their individual Christian lives. Leadership is hierarchical in the institutional church, and Christians are divided into “clergy” and “laity” (or their equivalent-”pastors” and “laymen”). Granted, some institutional churches have small group meetings outside of weekly church services where members get a taste of community life. But this community life is not the driving force of the church. And a hierarchical leadership structure is in place in the small group gatherings. Someone is always “in charge,” and the group is ultimately under the authority and restrictions of the pastor or priest. We can think of the difference between organic churches and institutional churches this way. When

One of the common mistakes that is made today is to confuse all house churches with organic churches. The reason is simple. Not all house churches are organic. Some are quite institutional. I have often been asked: “How does a house church operate?” That’s impossible to answer because the term “house church” is about as wide an umbrella as the word “plant.” To my mind, asking how a house church operates is like asking, “What does a plant look like?” There are countless kinds of plants — weeds, shrubs, trees, bushes, vines, etc. In the same way, there are countless kinds of house churches. I’ve seen so many types and varieties over the years that it seems that the only thing they all have in common is that they meet in a home. “Organic church,” therefore, best describes the kinds of churches that I and many other Christians around the world have experienced, lived in, and enjoyed. And it’s the kind of church that I believe the Lord is raising up in this hour. Add to that, the church that we find in the New Testament was above all things . . . organic. So it seems to me anyway.