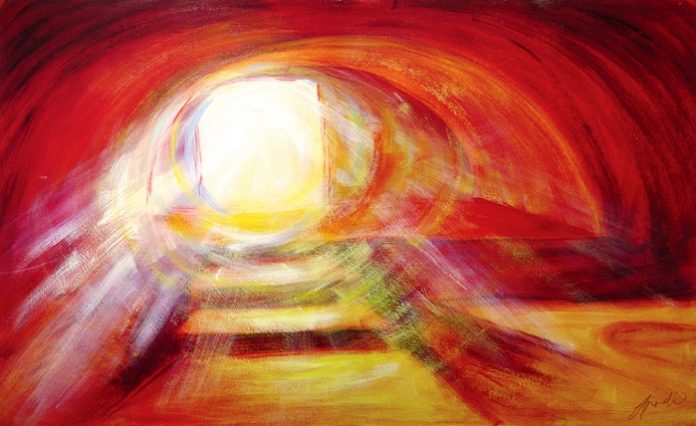 My thoughts on the real Easter Celebration follows;

The cross and Resurrection go so far beyond Jesus saving you so you can go to heaven when you die. Jesus was creating an entirely new race of humans. A new humanity.

As the writer stated in 1 Peter (parenthesis are added):

The writer is not thinking like an American individualist. He’s speaking to the group as a whole. As one. As a new nation. The cross and resurrection were the point of destruction of the old humanity that bites and devours one another and the birth of a new humanity that lives in harmony with their heavenly Father and loves one another.

Think of the apocalyptic picture in the book of Revelation of the Son of Man descending from the heavens with the sword proceeding from His mouth striking at the very heart of the nations. The cross was a death blow to the old ways of humanity. It was God’s judgment on all the nations (people groups) of the world. On the cross the King of a new nation began His reign wrapped in a robe drenched in His own blood. He IS the word of God to the world. Following him are a people wearing clean white robes. No blood is found on them because Christ put an end to the biting and devouring ways of humanity. He created a new race of humanity that is no longer a part of that bloody system.

Jesus recognizing the desperate drive in humanity to bite and devour others turned to us and said, “You need somebody to devour? Here is my body! Break it! Devour it! Let it satisfy your hunger so you will never need to devour another again! Take me into you! Here is my blood! Drink it! Let it once and for all appease your need to shed the blood of others to find peace.”

Then with eyes like fire He looked to the cross and said, “You need a scapegoat? You need a life to destroy to elevate yourselves? You need a person onto whom to direct all your rage, hatred, and violence? You need an object of disgust to be your rallying point so that you can unify? You need a cursed One among you onto whom you can direct all your evil? I’ll be your curse. I’ll be the object of shame and disgrace. I will be the scapegoat. But not just for now, but for all time…forever. You will never again need another person to despise, group to destroy, or people to crush. I will be it, the cursed one, the broken one, the despised One for all humanity. You will never need another. You need somebody to lynch? I am He. You need somebody to mock? I am He? You need somebody to publicly humiliate? I’m the One. Take this bread, drink this cup, as often as you do this, do it in remembrance of Me. Remember, I was the One. You will NEVER EVER need to do it to another. I stood in that place for all. In doing so, I exposed your sin. I showed you who you are. I showed you what you do. I revealed your nature. Your desire to crush, shame, and pit yourselves against one another. And in the midst of it all I showed you my heart for you as, in the thick of it all, I cried out not for your blood, not for vengeance, but for your forgiveness. You weren’t even aware that this is what YOU DO.

Then when the grave opened, and God raised me from the dead because I was judged as not having been deserving of the punishment that was handed to me, I appeared to you in all righteousness with all the authority of the almighty God and pronounced my judgment upon you. I said, “Shalom. Peace be with you.” With these words I set forth the new world order. The way things would operate from now on. I gave birth to a new creation, a new humanity that would never need another scapegoat again. So now, having had that tormenting itch finally scratched, you can now love each other freely and lay down your lives for one another. You no longer need an enemy to boost yourself up. You no longer need a “them” to separate yourself from in order to prove yourself as being of worth. I let you make me the enemy. I let you turn me into the evil “other” so you will never need another enemy again. I exposed your inclination to imitate the religious crowd out of fear and need for approval and your propensity to follow the mob out of your blindness to true justice so that now you can see who is actually worthy of imitating and know who to follow.

p.s. Easter Sunday: Lots of posts about how Jesus saved the world. Newsflash: If the world doesn’t see the people who say they follow Christ relationally healthy, loving one another and at peace with others, you might as well say, “Easter Sunday, the day Superman saved the world from destruction!” because the message holds just as much reality to the hearer. 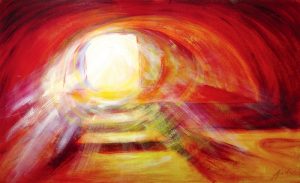 Last Sunday I was thinking to myself the Religious system focuses more on the cross than in the empty tomb! We need a dose of the REAL Easter Celebration! I know that many of the shallow once or twice a year Christians will not read this short article, but I thought Loren did such a fine job explaining what the real Easter (Resurrection Day) Celebration was all about that it needed to be published for us who are awakening to who we are in Christ.

The Church needs an Upgrade to the New Covenant!