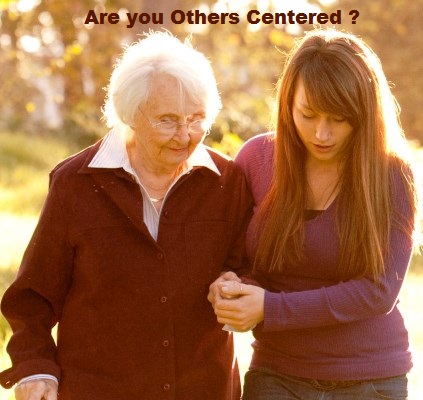 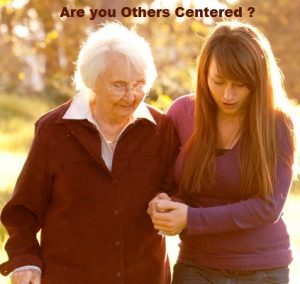 Are you others-centered? We are living in perhaps the most selfish and self-centered generation to date. Life in this 21st century is all about getting from others to benefit yourself. Recently the world of marketing and the religious system began to understand that to get from the consumer, you must give first. The problem is the hidden agenda, and like good CPA’s, they understand that in the long run they will have an advantage and be able to turn a profit from you. Say hello to the zero percent interest, free lunch with political promises, special first-time visitor benefits, one-dollar new pet exams, “BOGO” (two for one) grocery deals, and be prepared to be wined and dined to get you in bed, and I could go on and on.

The problem here is that as Christians we should not be influenced in any part of our life by the spirit of this age.

Because we have the example of our Lord Jesus Christ.

Phil 2:5-8 Let this mind be in you which was also in Christ Jesus, 6 who, being in the form of God, did not consider it robbery to be equal with God, 7 but made Himself of no reputation, taking the form of a bondservant, and coming in the likeness of men. 8 And being found in appearance as a man, He humbled Himself and became obedient to the point of death, even the death of the cross.

We also have the example of Paul the apostle.

1 Cor 10:33 just as I also please all men in all things, not seeking my own profit, but the profit of many, that they may be saved.

This I believe from scripture and by confirmation of the Holy Spirit is the ultimate test of maturity for a disciple of Christ. Not how many bible verses you know, not how faithful you are to your weekly religious rituals, not how many titles you have and how many years you attended seminary, and certainly not how many people come to hear you preach once a week.

This is not a new trick of the enemy because he knows that humanity naturally doubts in the goodness of its Creator and will seek to make things happen by their own strength (the arm of the flesh). He tried it on Jesus in the desert when the Lord was hungry, but it did not work.

Matt 4:2-3 And when He had fasted forty days and forty nights, afterward He was hungry. 3 Now when the tempter came to Him, he said, “If You are the Son of God, command that these stones become bread.”

I love our Lord’s answer; He didn’t say he wasn’t hungry. He didn’t say bread wasn’t good for you, and He didn’t say there was no need. Our Lord simply responded there is more that humans need and only the Lord can supply it. So, the next time the enemy paints you a picture of the facts as this world sees them, remind him that the just shall live by faith in a Father whose goodness is unquestionable. That doesn’t mean we understand everything He does. It just means we have made a decision to trust Him with our life.

So, what is the problem with living a life that is others-centered? Let me point you back to the words I quoted in Philippians; “obedient to the point of death.” That isn’t just talking about the cross. It’s talking about the “death of self”, that selfish nature we are all born with. The death that began for our Lord at the garden of Gethsemane when His Father permitted Him to be crushed in anguish, but He won the victory when He responded, “Not my will be done.” Jesus had a choice, and so do we every day.

The meter that measures the obedience to Christ just has two main settings, self and others. To the degree that you have allowed the Lord to crush your selfish nature and have allowed the Lord to dress you in His nature will reveal your maturity in Christ. What is your reading? What does your disciple meter read? How dead are you to your ways? At what point do you get off the “dying to self” train and say, “Enough is Enough!” You have a choice. The Lord of creation did not make robots. The Lord seeks an others-centered lifestyle that you have voluntarily chosen to live.

Rom 12:1-2 I beseech you therefore, brethren, by the mercies of God, that you present your bodies a living sacrifice, holy, acceptable to God, which is your reasonable service. 2 And do not be conformed to this world, but be transformed by the renewing of your mind, that you may prove what is that good and acceptable and perfect will of God.

We used to joke around in the cemetery, I mean seminary, that most Christians wiggle off the table when the going gets tough. Most people hate getting an MRI because of the feeling they get going in that tube, but they voluntarily permit it because they know they need the information the doctor will get from it is for their own good. If we could only trust the Lord the same way. Living to die to self that the life of Christ may make us whole.

I don’t know what you are going through right now, but I guarantee you it requires some type of death to your will. What I am describing is not easy; if it were, all Christians would be mature. In the 21st century most have plateaued and have stopped growing at the last place the chose to say no to the voice of God. Never have the lines been so blurred between the world and that which calls itself the church today. I have news for you, in the church the mainstream is not the God stream. If numbers excite you, be assured, you will be on wrong side every time.

Matt 7:14 Because narrow is the gate and difficult is the way which leads to life, and there are few who find it. 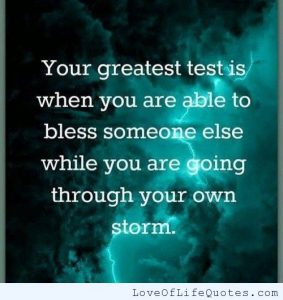 We can argue religion till the cows come home, but that won’t change our lives. We can debate institutional or organic church, small groups, or large groups, but that won’t give us a true measure of our maturity or test the depth of our discipleship.

How is what you believe working for you? Be honest. How high is your stress? How much anxiety do you have? How is your weight? Are you a person of peace? Don’t tell me how much you love God! How well do you get along with others, and how quickly do you submit to the Lord’s will when it goes against your own personal desires and wants? Finally and honestly, what does the dead-to-self meter read? That will give you a true read if you are others-centered.

We have a saying in Cuba, “dime con quién andas y te diré quién eres.” It means; tell me who you hang with, and I will tell you who you are! If you don’t like the person you see in the mirror, make a move. This Christian life is much easier when it’s done with others who have chosen to obey His will FIRST at all cost by living their lives others-centered. Ask the Lord to give you His love for others. Loving others FIRST is a daily lifestyle. not a yearly event. So are you others-centered?