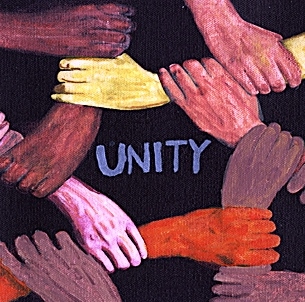 “Now I am no longer in the world, but these are in the world, and I come to You, Holy Father, keep through Your name those whom You have given Me, that they may be one, as We are.” John 17:11 From the very beginning of time God has desired a people to be one with Him, being of the same mind and having the same heart. His divine purpose was to take two and make them one and then to have them multiply. God created Adam and from Adam He created Eve and then made them one so that they could be “Fruitful and multiply.” This doesn’t make sense to the world because one times one is only one, but we are not of this world and we belong to a “Triune God”, a God of Three who are One!
The kingdom of God operates on the basic principal of oneness, being one with the Father, Son and Holy Spirit as well as being one with one another. Salvation comes about in a person’s life when he makes the decision to become one with God by believing in the Son’s redemptive act of forgiveness on the cross. By becoming “Born again” one becomes one with the family of God.One mind, one purpose one plan: to multiply and spread God’s kingdom around the world. One family, one team, one vision and one result: multiplication! The harvest of the earth cannot be obtained by the church being divided, only by the unity of the Spirit and our oneness with Him can we succeed in fulfilling God’s plan.”That they all may become one, as You Father, are in Me, and I in You; that they also may be one in Us, that the world may believe that You sent Me.”And the glory which You gave Me I have given them, that they may be one just as We are one:”I in them, and You in Me; that they may be made perfect in one, and that the world may know that You have sent Me, and loved them as You have loved Me.” John 17:21-23THAT THERE BE NO DIVISIONNow I plead with you brethren, by the name of our Lord Jesus Christ, that you all speak the same thing, and that there be no divisions among you, but that you be perfectly joined together in the same mind and in the same judgment. I Corinthians 1:10

For hundreds of years the body of Christ has been attacked by the devil and seduced to divide over a multitude of reasons: doctrine, race, political preference and financial status being just a few. Since the beginning of time starting with Adam and Eve Satan has tried to drive a wedge in our fellowship with God and with one another.

Salvation is based on relationship and not on doctrinal statements of faith and creed. Most of the body is divided over tongues, demons and baptisms, arguing about gifts and fighting over what should ultimately bring us together, the word of the living God. Sadly the Bible has divided us and caused us to become alienated from our brothers and sisters.

Division fragments the body of Christ and weakens our defenses against the enemy providing them with many inroads to gain access to the flock enabling them to be defeated in battle and even destroyed by the devil’s schemes. Because men in leadership have not equipped the body and have stepped into the place of headship that is reserved for the Lord Jesus Himself, the powers of darkness have prevailed against the church leaving it weak, wounded and defeated.

Jesus appointed twelve men to lay the foundation and to provide protection from the devil by praying in agreement and paying attention to the word. Without this firewall around His first expression of the church, the enemy would have easily destroyed this fledgling body of newborn believers. There were twelve gates around the city of Jerusalem and they had twelve gatekeepers to defend the entrance of the city, what if there had only been one?

(Editors Note: Herein lies the greatest problem of the 21st Century Church. We know these foundational gatekeepers to be prophets and apostles but where are they today? Where is the visible model that works together in unity and humility for the sake of the ONE BODY OF THE LORD JESUS CHRIST??)

“Therefore take heed to yourselves and to all the flock, among which the Holy Spirit has made you overseers, to shepherd the the church of God which He purchased with His own blood.” Acts 20:28

There is one body and one Spirit, just as you were called in one hope of your calling; one Lord, one faith, one baptism; one God and Father of all, who is above all and through all, and in you all. Ephesians 4:4-6

Imagine the power that would flow if the body of Christ world wide were united as one without division and denomination and without the control of men with selfish agendas. The world would shake under their influence, salvation, healing, and deliverance would flow freely to all who asked and the harvest would be reaped!

Electricity flows through wires freely until a circuit is broken and the power is stopped, so it is with Christ’s body, the circuits have been broken and the lights have gone off. Sitting in darkness in our little cubicles waiting for a sign from heaven and for the power to come back on and yet until we re-connect with our spiritual family they will never come on again.

The powers of darkness have successfully divided the body of Christ with tradition and false doctrine not to mention the guilt and shame that is spread throughout the church when they don’t show up on Sunday. Penned up in little sheepfolds, stuffed with doctrine and told to show up, the little flocks slowly wither away into obscurity.

But speaking the truth in love, may grow up in all things into Him who is the head- Christ- from whom the whole body, joined and knit together by what every joint supplies, according to the effective working by which every part does its share, causes growth of the body for the edifying of itself in love. Ephesians 4:15,16

ONE FOR ALL AND ALL FOR ONE

For the love of Christ compels us, because we judge thus: that if One died for all, then all died; and He died for all, that those who live should live no longer for themselves, but for Him who died for them and rose again. II Corinthians 5:14,15

It seems to me that the famed Musketeer’s oath may have come from this scripture and it conveys their deep devotion and love for the king as well as his love for them. So it is in God’s kingdom, we as His children are to be devoted to Him even to the death of our dreams and visions and even if it costs us our life.

Jesus Christ is the King of all kings and the only One to die for His people to give them life, He is above all rule and authority and offers the highest calling to mankind, the honor of dying for Him. No other religion can boast of their god dying for them. Jesus is the only source of eternal life and He gives it freely to all who would give up their life for Him.

The Kingdom of God operates like an electrical engine and is powered by our relationship with Him and with others, fueled by the Holy Spirit. By being one with the Father through the blood of Christ and by being of one accord with the rest of the body, the supernatural engine becomes a powerful machine that begins to multiply everything it touches.

As the Lord Jesus Christ walked upon this earth with twelve men He provided us a model to replicate by connecting them together with Him and with one another. The twelve begin to multiply into 120 and the fuel injectors kicked in and the Holy Spirit empowered the machine to multiply into 3000. The rest of the story is history, from 3,000-20,000 the body grew with phenomenal growth.

Are you ready to see it again? If so you will have to change your mind about how the kingdom functions and re-connect the power source that only comes from an intimate relationship with God and man.  that can be found in nothing else. The power of oneness!

Now therefore, you are no longer strangers and foreigners, but fellow citizens with the saints and members of the household of God, having been built on the foundation of the apostles and prophets, Jesus Christ Himself being the chief cornerstone, in whom the whole building, being fitted together, grows into a holy temple in the Lord, in whom you also are being built together for a dwelling place of God in the Spirit. Ephesians 2:19-22

How to Conduct a Proper Citywide Unity Event