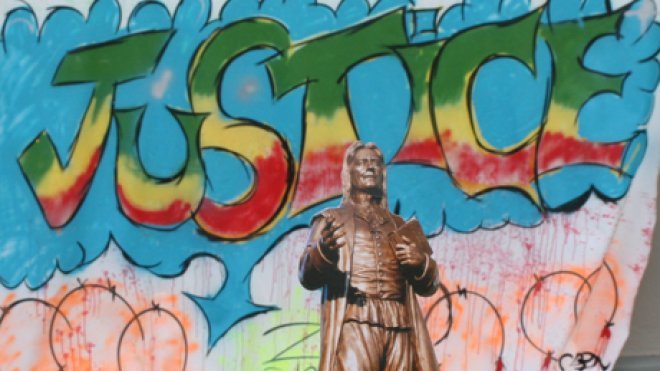 Is Social Justice an attack on the Kingdom of God? Jesus purposed for His followers to be His kingdom until such a time as He returned in person. This kingdom was never marked by physical locale, ethnicity, or governmental structure as in temporal empires. Yet, it’s marking was invisible borders, a language and a culture that cut across all standards and ideals typical of efforts of unregenerate mankind.

Today, there is a preoccupation in society—which unfortunately includes most of what calls itself church—with “social justice” “peace” and “equality.” These notions are never out of daily conversation and political vogue. These nostrums are so strongly held you’d be thought of as a harsh if you didn’t unilaterally agree. These ideals even encompass religious thought and this is the problem: it obscures the kingdom of God (KOG) that Jesus taught.

Basic to these ideals—which I shall park under the general term social justice—is another notion: that unregenerate mankind is basically ”good” or able to be “good.” I mean, why expect any form of justice, peace and equality if there wasn’t capacity to deliver it, right?

What used to be a marked delineation of the KOG now is co-opted by the faux ideals: “social justice” “peace” and “equality.” Humanity as a whole strives to be “a better man” to prove that he/they/us is capable of it all the way from seminaries to the Oprah Show, to Washington DC, and to the United Nations. What’s more, humanity commonly accepts shabby attempts and incremental “success” as proof of humanity’s moral ascendance as whole. Petitions, protests and political correctness enunciating the ideal of innate goodness are near pandemic.

Another quadrant in the “Kool-Aid” of social justice is the facilitation and encouragement of the religious community. What used to be addressed just to followers of Christ—the scriptures—is now roundly applied to society at large through theology by what calls itself church and it’s academia. The attempt is to be a part of the culture and society rather than a separate, co-existive contrast to it: the Kingdom of God. So the religious community is a willing accomplice in obscuring the KOG and deluding non-believing mankind with the idea that he can be better than God said of him in the scriptures.

Mankind is never going to be “good” from God’s perspective because his every thought is sin: Rom. 3:9-18, Eccl. 7:20, Jer. 17:9, John 6:44, Eph. 2:1-3…. So to expect mankind to be good or that by doing “good” in temporal realities it will offset mankind’s intrinsic evilness is first of all nuts. Secondly, it’s unbiblical and anti-God. But what calls itself church today is leading the charge in that delusion.

Religious people can only apply texts out of context and convert Old Testament ideals—given to the Jews for a specific reason—to come up with the notion of social justice within a world full of nonbelievers. Scripture tells us the followers of Christ are empowered to do what is right from God’s perspective by God Himself. A believer’s goodness is something God provides. So what does this say about those who do not have this empowering? In the New Testament (NT) we never find a basis for social justice unless we strip Jesus teaching of what He really said.

Jesus worked with the poor but only but only those who were open to what he was saying. He did not try to solve society’s fundamental problem of creating poverty and destruction. The poor have been crushed by the world’s system and they can see the folly of it. Thus, Jesus begun working with them, but it was not about relieving their condition. It was about contrasting the world order… In so doing, Jesus contrasted the system of the world with His kingdom.

Christ never sought to fix the conditions that created injustice, poverty and victims. The early church cannot be found seeking to end poverty, which was more pervasive then than it is today. The early church took care of THEIR poor; those committed to Christ who’d been disowned by society for joining the kingdom of God. You also see the early church reaching out to the poor on a personal level just as Jesus did.

There was no effort on the part of anyone in the NT, in teaching, advocating or practice of relieving “poverty” in the general population around the fellowship of Christ. The reason is because that is not what the church, the body of Christ or the KOG were supposed to do. These realities are what signified “the world”—the collective of non-believers and their system that is anti-God. Early believers met “the poor” of the world in context to their daily lives and treated these with kindness, love and respect: helping them.

Let the dead bury the dead…but as for you, go and proclaim everywhere (the gospel of) the kingdom of God. Luke 9:60

To better understand read my other articles, here: https://universityofhardknocks.academia.edu/TimPrice

Jesus spent three years teaching His disciples and another 40 years through the Holy Spirit guiding them into the full meaning of the Kingdom of God. I can’t articulate in one short piece all the related details. It’s a study and revelation. Hopefully articles like this help to indicate your mind and heart toward what Christ intended.
Lest anyone misunderstand:

1. Do you think I am saying screw the poor?
Answer: Not hardly! The point of this article is to point out the crafty bait and switch of idea between what the Kingdom of God is supposed to be and empty concept of “social justice.” How can unregenerate people be just? They can appear “good” through self-loathing and guilt. But to be as Jesus said is good, they can’t. Social Justice offers the bait to think one is good, but mankind is unable to deliver and sustainable continuum of justice on a social level. Therefore, the theory is busted.

In the early church, most believers were often poor and many times persecuted. For them to reach out to the poor wasn’t to fix their problems but to offer them something society could not: truth and a new beginning in something God was doing.

Social Justice is just about the money. It offers the “giver” a good but empty feeling and does nothing for the soul of either the giver or the recipient. The Kingdom of God is about contrasts. We don’t need money and social access to be equal or able to live. We have community and a way of living that inverts the economic confines the world order uses.

2. Do you think I am purely salvationist?
Answer: Not hardly. As followers of Christ, we can’t offer anything to anyone IF they will just convert to our way of thinking. In the kingdom of God, we offer the high price of following Jesus to all who would listen—a price that every person can pay—and by our lives, community and the unexplainable that occurs in our proximity, the poor and wealthy of the world alike are drawn to something they can have in their natural condition or by any other means but surrender. This abdication of each person is as much an obstacle to the poor as the rich because mankind is arrogant and self-willed.

Social Justice would mean very little IF the kingdom of God were a reality amongst the followers of Christ. But unfortunately most are infected with humanism—the religion of those who don’t to take God’s word for truth—and taken the side of the world order: a physical/temporal reality where in Social Justice seems like a proper answer. The only problem is the realm proposing Social Justice is the realm making the issues for “social justice” to address.