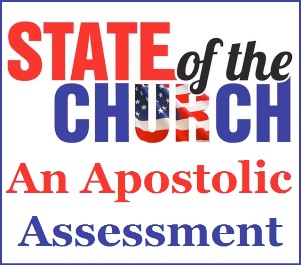 Today’s church is facing formidable and unprecedented challenges. The race for market supremacy in a consumer-driven competitive religious arena is releasing all manner of questionable strategies that appeal directly and only to the flesh. The blatant advertising of creature comforts and conveniences are telling signs of the Age of Aquarius’ inroads into what many people believe to be the postmodern hip church. Their alluring advertising appears right next to those of car manufacturers and insurance companies.

Overreaction by the religious right paints another picture that is filled with inaccuracies and is often of a wrong spirit—sometimes even mean-spirited. Neither a gospel of stringent laws nor a gospel of permissive lasciviousness rightly portrays the heart or intent of God for His kids and His kingdom.

Apostolic migration was not complicated in the early years that immediately followed the outpouring of God’s Spirit. One might think that, here in the twenty-first century, with all of the tools we have available, that we could make more progress. But, we are basically stalled, divided, diversified, compromised, and going nowhere with kingdom advancement efforts.

• The new creation is the church here and now!

• The kingdom is at hand here and now!

Yet—where is the church? And, what does the kingdom look like?

“Conversion is not a repairing of the old building; but it takes all down, and erects a new structure. It is not the sewing on a patch of holiness; but with the true convert, holiness is woven into all his powers, principles and practice. The sincere Christian is quite a new fabric, from the foundation to the top-stone. He is a new man, a new creature; all things become new.” – Joseph Alleine

The here-and-now church—the new creation—is found scattered among and in the midst of contemporary churches, traditional denominations, and independent fellowships. Some are meeting in homes or halls, and others—genuinely new creation people—are not presently identified with any group. Jesus discounts none of them. Father is no respecter of persons. And, the Holy Spirit continues to lead followers into all truth—sometimes haltingly, sometimes full speed ahead.

The apostles there and then began at “zero”—no history, no baggage—with three thousand newly birthed spiritual babies who had undeniable conversions and immediately entered wholly into newness of life.

They had not merely been reasoned into an intellectual decision, or frightened into buying a fire insurance policy at some altar. They were authentically born of the Spirit, delivered from the power of darkness and conveyed into the kingdom of the Son of His love. Entire households were swept into the kingdom together. They continued steadfastly in the apostles’ doctrine.

The State of the Church Today

Apostles here and now face numerous complications that were not present in the formation of the early church:

• Many who claim to be Christians do not know Jesus, He is not truly Lord over them, and His life is not found within them. Their “Christian activities” merely fill the “religious pigeon holes in their roll-top desks of life.”

• The majority of those who are genuinely born again and are really parts of the new creation in Christ are lukewarm at best, accustomed to the coddling of traditional and promotional ministries, and are not open to foundational formation or any expectation that might invade their comfort zone and disturb their routine.

• Those who would challenge them are usually considered to be fanatics, because the present-day religious culture has built up its defenses to prevail in the face of earnest gospel workers.

• Some are walking wounded, having been abused by ambitious church leaders, and shrink back in fear, even from the most loving servant-leaders.

• In many circles here in the United States, even if Christians were to find themselves in an upper room, and the fulfillment of Joel’s prophecy had been in their presence, the entire “happening” would likely be subjugated to intellectual analysis.

• Christian community does not come naturally for twenty-first century Western believers. Many believers still lead the individualistic and independent lifestyles of most here-and-now Americans.

• The prevailing principality over the United States is openly and brazenly celebrated every year on July 4, Independence Day. The spirits of independence, narcissism and mammon form a threefold cord (that) is not quickly broken. They rule from Wall Street to Main Street, making this one of the most difficult mission fields of the twenty-first century.

• A majority of twenty-first century American believers do not know how to receive apostles and therefore do not have holistic foundations upon which to build lives that will remain stable in times of shaking.

• Most churchgoers in America are trained to be faithful in attendance, good audiences, and generous with their resources. Those who behave in this way are duly accredited, affirming that their performance is the fulfillment of their Christian duty. This includes multitudes who have yet to experience Christ.

• The vast majority is micromanaged, yet not discipled.

A comprehensive revelation of Christ—which experimentally includes His incarnation in us as repositories of His presence in these clay jars—lifts us above and takes us beyond whatever today’s shaking involves, and keeps us in peace concerning tomorrow.

Unless and until we have put on Christ, learned Him, heard Him and have been taught by Him, we are vulnerable to shaking, and not very helpful in moving others toward our Solid Rock.

Apostles who are laboring and leading in the hope that Christ might be formed in the people are to be encouraged. Unfortunately, some lay down their reformational mandate as master builders—architects of the faith—and compromise by simply adapting themselves to prevailing religious systems.

Financial pressures intimidate and overwhelm others. Many give up their dream, become itinerant preachers or local pastors, and live life in survival mode.

Apostles who prevail in selfless love, abundant life, and substantive reality, are voices crying out in the wilderness.

(Chapter 1 of “Church and Kingdom Here and Now” – http://www.DonAtkin.com)