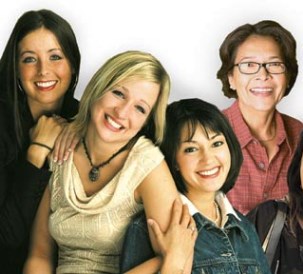 Equality is a bumpy road (and sometimes it makes me want to stand on tables & scream). I am coming upon my 10 year anniversary in full-time vocational ministry.

January 1st of 2004, I went on a big church staff as the associate care pastor; the following year I became the adult ministry pastor, and then the year after that I lost my job after a big ugly bru-haha related to power, politics, and inequality that would make your stomach turn. Since then, I have been co-pastoring our wild and beautiful little faith community, the Refuge, alongside my friends, brothers, and sisters. I had no idea when I entered vocational ministry how jacked up the system was. I was naive. I was passionate about healing and transformation in people’s lives through community. I was happy in my own little world until I began to see the realities of the system I was in. like all male elders, women doing announcements but never teaching. all the male pastors going to play golf together and never getting invited. Talk about “pastors’ wives,” but never “pastors’ husbands,” having it be completely okay for me to preach regularly to male addicts in recovery ministry, but “real church” was somehow unbiblical.

When we left to plant the Refuge, things within our own community were pretty easy related to equality for women. We really didn’t talk about it a whole lot inside the Refuge. We just did it. I attribute that to my friend and teammate Karl, who sacrificed a lot on behalf of a better way.

However, on the outside, in the wider church system, it’s always been a different story.

There have been too many weird moments to count, but the low lights include my book not being able to be sold by the #1 christian retailer because I am a female lead pastor, being dis-invited to speak at a baccalaureate once the conservative evangelical contingent discovered a woman pastor was coming, demeaning comments, sexist remarks, not being able to perform a memorial service in a church because of my gender, and speaking at a conference where the introduction was, “Okay, now let’s bring up the women,” after a long line of male speakers.

It’s so hard to explain what it feels like, shamed is a good starting place, but it’s more than that.

It’s confusion, too, a weird mixed message, we want you…but only when it works for us.

Each and every time one of these things have happened, I have asked myself, “Why am I still here?” “Why bother?” “Why stay in a system that does this to half the population?” “It’s a lost cause, patriarchy is so deep; It’s never going to change.”

Patriarchy is deep, insidious, ugly, and extremely pervasive in the world. The biggest travesty is that it is pervasive in the church of Jesus Christ which I always say should be the free-est-most-inclusive-most-wild-and-diverse group of people in town, but patriarchy won’t shift unless we keep working against it. The most strength over time is going to come from the margins. However, power never goes down easy.

There’s a lot of bru-ha-ha over why women would even want to be part of conferences where patriarchy is so obviously embedded. It’s tough, but if we’re going to get to a new place, we sometimes have to walk this crappy, ugly road to get there. It’s a dilemma. I don’t do that many outside gigs, but I know sometimes I am probably only invited to fill a female slot, and that sometimes sucks. Some experiences have really hurt my heart, but I have this deep sense that the only way to get to something new is to suffer the realities along the way.

if I were only paying the price for me, it wouldn’t be worth it. I have so many beautiful things in my life, a wonderful community, and plenty of satisfying and challenging work in my own little world. The last thing I need is the brain damage of sexism when it comes to some of these imbalanced events and groups-that-are-so-stacked-with-boys-that-it-makes-me-nutty. But it’s not just about me. It’s about my sisters, friends, daughters, and dear-women-around-the-world-who-need-someone-to-break-chains-on-their-behalf. And it’s also about my brothers who are trying to learn a better way.

Some will never get there; their theology will never support equality for women. However, I know far more men who want something different but are so used to the way it’s always been that they don’t even realize how hurtful they are being. Most men aren’t friends with women, and we all know we usually just play with our friends. That doesn’t let them off the hook; it’s time for them wake up, break out of denial, and practice a better way.

Women are on the hook, too. We are going to have to slog through some of this mess for a while. It doesn’t mean we’re supposed to be quiet and toe the line. We are supposed to call out the injustice and tell our stories so people will see. calling that disunity is an abuse tactic to keep people quiet, but we are also going to have to keep coming to play. I’ll admit, after a few wing-dingers, I don’t want to. I am re-thinking some things for sure, but I know this – the road to equality is bumpy, and the very best criticism of the bad is the practice of the better.

How to deal with the Women in Ministry Inequality

Some days I have more hope than others. Today, I will say my hope supplies are a bit depleted, but I am going to borrow some from my friends who are bravely speaking out, risking their pride, scorning shame, calling out the craziness and reminding me that the road to equality is bumpy. It’s ugly. It’s going to hurt. Some days it’s going to make us want to stand on tables and scream.

God, show us what it means to be a reflection of you. what we’ve created sure isn’t.

Editors Note: For those that don’t know Kathy, she doesn’t use caps see http://kathyescobar.com/